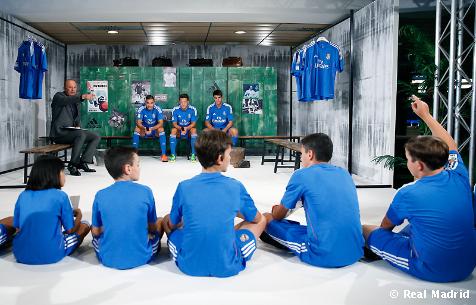 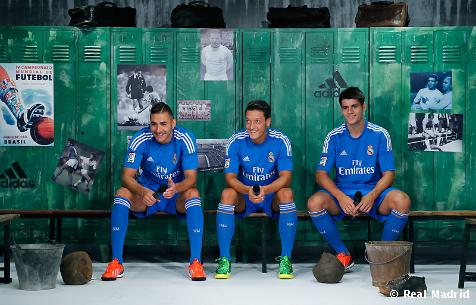 La Liga giants Real Madrid have launched their new away kit for the 2013/14 season in collaboration with Adidas. The kit draws its inspiration from the halcyon days of the club back in the eras of 30’s to 50’s.

The design of the away kit has been inspired by an unmistakable retro-style. The colour combination of royal blue and white is inspired by the away kits worn by the legendary Galacticos during the most successful period in the history of the club.

The kit for the first time has used “mélange” fabric; with fine cotton finish that gives a retro look inspired by some of the club’s former jersey’s worn during the early years and it includes all the latest technologies from Adidas too.

Madrid remains one of the most glamorous clubs in the world with more than a century of history. The club founded in 1902, used to play their home matches at the mythical Estadio Chamartín before moving on to a 85,454-capacity Santiago Bernabéu Stadium in 1947.

Several great players like Alfredo Di Stéfano, Francisco Gento, Ferenc Puskás to modern greats like Raul, Zinedine Zidane and Cristiano Ronaldo have all graced the green blades of Bernabéu, establishing the status of the club as one of the biggest in the planet.

30-50’s era was the time, when the club won back to back league titles for the first time in their history. During the time of Second World War, Madrid defeated Barcelona 11-1 in a historical semi-final match, of the Copa del Generalísimo, which has been renamed to the Copa del Rey in honour of General Franco.