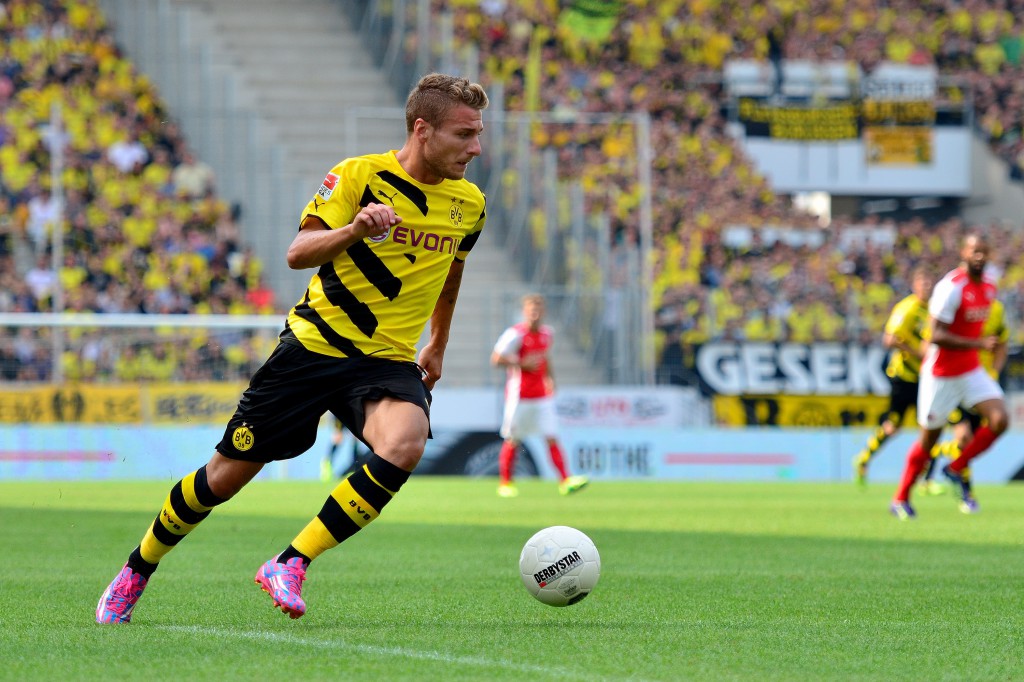 In a season of utter disappointment, it was yet another letdown for Dortmund. Five minutes from victory against the side in possession of Die Schwarzgelben’s near-customary second place in the Bundesliga, an unmarked Naldo equalised for Wolfsburg. The Yellow Wall kept singing and the flags never stopped waving – but the bitterness that has been all too common at the Westfalenstadion this term was palpable. But while Dortmund had let themselves slip once more and paid the price by remaining in the relegation zone, one man had done himself proud on the day.

His surname, if anything, belies his true nature – Ciro Immobile. During his formative days at Pescara, attack master Zdenek Zeman quipped that the youngster “can’t be my side’s centre-forward with a name like that”. Over the summer, the British press grabbed hold of the English meaning of the striker’s name to release a series of witticisms on the Azzurri player. There’s a hilarious irony evident to English-speakers sitting in observation of Immobile – he thrives off of movement and industry.

Back in western Germany on Wednesday, the former Torino star put in his best performance in a Dortmund shirt against Wolfsburg. It was his willingness to make unselfish runs that led to Immobile assisting Pierre-Emerick Aubameyang’s opener with a cross from the left channel. Then the 24-year-old was alert enough to pick up the ball in the attacking third after a team-mate won it back with a superb slide tackle, evading defenders and unleashing a spectacular effort from outside the area to give Dortmund a late lead. Immobile was a single-handed hive of activity throughout the day, the chief exporter of danger Dortmund so desperately need him to be.

Jurgen Klopp concurred that Immobile had for the first time truly played to his potential in a yellow and black jersey. While the Dortmund manager remains under considerable duress, Immobile at least relieved some of the mounting pressure on himself. Despite having scored seven goals in 900 minutes of action across all competitions in his first few months in Germany coming into Wednesday, Immobile faced questions. The team’s overall dismal performance weighed on pundits’ evaluation of him. Rather unfairly, the flop tag floated around the young striker. Rumours suggested he could make a quick return to Italy – but the angst connected to these claims reveal something deeper about the state of football in Immobile’s homeland.

When Dortmund confirmed the capture of him for some €19 million in early June, alarm bells went off around the peninsula, and rightly so. How symbolic it was of the contemporary football landscape in Europe that Italian football had handed over one of its brightest young stars to the Germans. Even more galling was the Juventus had passed on him. The Scudetto holders owned 50% of the reigning Capocannoniere’s rights, but chose to offload him in order to turn a profit, relying on older stars like Carlos Tevez and Fernando Llorente instead. No other Italian club in need of a centre-forward could afford Immobile, or wanted to dig deep enough into the coffers to take a chance on him. The graying former crown jewel of Europe that is Serie A thus relinquished control to the Bundesliga, leaving Immobile to make his way to the top through German football.

When Immobile didn’t hit the ground running at Dortmund, it exasperated an already nervous Italian press and population. What if the boy destined for greatness came up short abroad, his promising career brought to a grinding halt? Would the blame then truly be on an Italian system that had failed him by not offering the proper apparatus to nurture him at home? The Italian game has empty nest syndrome in an era in which young stars are flying the coop of Serie A.

Immobile’s showing against Wolfsburg showed that in all likelihood, he’ll be just fine on his Erasmus Programme in Germany. With consistent starts, Immobile will thrive under Klopp. The overreaction to his tame start at the Westfalenstadion was an overreaction in response to Dortmund’s awful form and Immobile not serving as a saviour. Meanwhile, the problem of Italy forfeiting its stars of the future remains prevalent.

In the summer of 2012, Marco Verratti was lost to Paris Saint-Germain before he had even set foot on a Serie A pitch or turned 20-years-old. Since, the midfielder has always maintained that he’s never regretted leaving Italy. Seeing him jet off to France was a great loss that hasn’t been forgotten, and Verratti’s lack of retrospective regret a damning indictment of the Italian game and how it regards youngsters.

Look at Mattia Destro’s current situation at Roma. To this day, he remains second fiddle to a 38-year-old Francesco Totti, who, while still brilliant in the twilight of his career, will soon need to be replaced. Destro offers a different style to Totti that in fact better suits Roma, but boss Rudi Garcia is reluctant to pass the baton on to the 23-year-old. It’s caused tension between Destro and his club. He’s admitted to being pleased about interest from the Premier League and Bundesliga. Unless his situation at Roma improves, there is a distinct chance Destro too could make his way beyond the Italian border – and one would almost be hard pressed to blame him.

It has, then, come as a surprise that Manolo Gabbiadini is on the verge of sealing a move up in quality within Italy – to an unlikely buyer. Napoli have come under criticism in the Aurelio Di Laurentiis era for distinctly lacking an Italian identity. On a weekly basis the Partenopei generally field at most two Italian players. But Napoli have stepped up to take on Gabbiadini, who hasn’t been short of links with English clubs. The Sampdoria star’s move to the San Paolo hasn’t been sealed yet, but is expected to go through in January. Having Gabbiadini at one of Italy’s top clubs will be a victory for the game in the peninsula, avoiding an outcome similar to what happened with Immobile.

There’s still plenty of work to be done, however. Simone Zaza and Domenico Berardi are attracting glances from abroad, as has a mistreated Stephan El Shaarawy for quite some time. Mattia De Sciglio is on the radar of the likes of Real Madrid, while fellow full-back Matteo Darmian’s value is ever-rising and Italian suitors will face stiff competition for him. Then there’s Mattia Perin, touted as Gianluigi Buffon’s natural heir, whose €20 million price-tag means wealthy foreign clubs have an inherent advantage in his pursuit.

Beyond just financial factors, a cultural issue has stunted Italian football’s ability to develop its own talents. There’s not enough trust in them. As Juventus and Roma, the two leaders in modernising the game in Italy, have done in the cases of Immobile and Destro, proven veterans are often chosen at the expense of their younger counterparts. In an effort to maintain competitiveness, Serie A has somewhat gone retrograde. Developing home grown players and reserving limited transfer funds to secure their future with one of Italy’s big boys would bear fruit down the road. Quick fixes have become all too common – long term thinking will help cure Italy’s empty nest syndrome.

Like with Italy’s other latent problems, it won’t change overnight. What becomes of Zaza, Destro and company in the coming years will be quite revealing as to whether the current attitude is changing for the better. German football’s success has been due in large part to investing both time and money in the best youth the country has to offer – and even foreigners like Immobile. The angst surrounding his humble start to life in Germany was misplaced – the fear of a footballing nation watching its future luminaries lured away. Italian football has empty nest syndrome with the kids casting their eyes around Europe, and only the powers that be can solve it by changing the way the youngsters are viewed at home.