Soccerlens is very privileged and honored to welcome a legend of world football, Enzo Francescoli. Mr. Francescoli, who was born in Montevideo, Uruguay, was one of the best players of the modern era. He was a striker with unusual grace and elegance on the football pitch. He was affectionately known as “El Principe.” For younger members in our audience, please take a few minutes to watch the featured highlight video (below). You will see an artist at work, and understand why he was called “The Prince.”

He is now the CEO of GolTV, which began operations in 2003, and is the only Spanish language network that televises soccer 24 hours a day, seven days a week, in North America. GolTV also broadcasts in English, and reaches a nationwide audience through cable and satellite operators. Their target audience is comprised mainly of Hispanic, European, Asian, and American fans 16 years and older.

In 2003, GolTV was created by Francisco Casal, Nelson Gutierrez, and Enzo Francescoli. In less than five years, they have penetrated 1 out of every 3 Hispanic households that have cable and/or satellite services in North America. Overall, GolTV reaches 16 million viewers of varying ethnicities with the common passion of international football. GolTV broadcasts the incredible number of 1,500 games a year, and many of them are live. They cover such popular European leagues as the German Bundesliga and the Spanish La Liga, along with Central and South American competitions in El Salvador, Guatemala, Honduras, Bolivia, Colombia, and Uruguay. They also broadcast either on a live or tape-delayed basis UEFA Cup matches, Champions League, Copa del Rey, Coppa Italia, international friendlies along with several country-specific highlight shows such as the AC Milan Channel. Their motto is “No soccer fan is left behind. A bilingual channel for a bilingual nation.”

Among his many honors, he holds one that is quite significant when we examine other South American legends who came before him. He won the Copa America, which is the continental competition of the Americas, three times with Uruguay. Pelé and Diego Maradona never won this tournament with Brasil and Argentina, respectively. 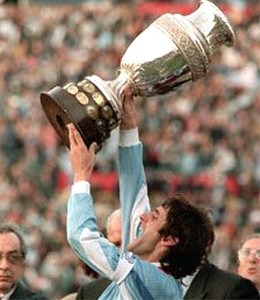 As the captain of Uruguay,
raising La Copa America in 1995
on home soil. Image courtesy of
elmundo.es.

I only saw him play once in person, although many other times on television. To give us a personal perspective, I asked my cousin, Oscar Amoia, who grew up in Buenos Aires, to provide his thoughts about the unique contribution of Mr. Francescoli in Argentine football. Oscar is a lifetime member (socio vitalicio) of Boca Juniors, and saw him play many times during the great derby between Boca and River Plate.

“Enzo was and is an authentic gentleman…
A great footballer, a great person.

As a player, he was strategic, an authentic leader on the pitch, a great finisher, coolness at the moment of scoring a goal, and had a strong shot.

Video of the goal against Poland in 1986.

I recall a great overhead kick (called a ‘Chilena’), at Mar del Plata, I believe it was against an Eastern European selection when he was playing for River Plate, he scored one that makes you remember, even today they repeat it on TV.

A type of man who always conducted himself well, within and outside of the field of play.

A rarity, he is a friend of Maradona, I say rare because Diego hasn’t always associated with ‘good people.’ Diego always considered him a great player, one of the best of all times.”

You participated in two World Cups for Uruguay, won three Copa Americas, and competed in many World Cup qualifying games from one of the most grueling regions. Could you please discuss some of your fondest memories during the many times that you represented and captained Uruguay?

First let me say having played, worn and defended my country’s colors for many years is what truly fills me with pride. World Cup play was definitely an indescribable and tremendous experience… Even though we did not win.

But I did take away the experience of three incredible wins playing America’s Cup (Copa America). The most important and unforgettable moment happened during the ’95 win which occurred in my country and at the end of my career as a player. Lifting that winning Cup with my father and family as witnesses was… Well there are no words for that!

The Hispanic market is growing by leaps and bounds in the USA. While your soccer coverage targets this significant market with a passion for this sport, what future plans do you have to promote your services to non-Hispanic soccer/fútbol enthusiasts in North America?

The idea is to be a channel for all soccer aficionados in the U.S. We did initially focus on the Hispanic market in the first year to gain a foothold. However, we like to think of ourselves as a multi-ethnic channel that caters to all soccer fans regardless were they are from. Our programming and our leagues are a testament to this. Indeed, each year, as we continue to grow, we look to invest in the very best soccer programming, continuously adding leagues and quality programs to insure we deliver the most complete and comprehensive soccer coverage from around the world.

During your career in Uruguay, Argentina, France, and Italy, you played in an era of great defenders. Who were some of the players that gave you the toughest challenges?

The hardest defender for me was Karl-Heinz Forster, a German defender. I played against him in France and in the Mexico 86 World Cup. Later, I enjoyed him as a teammate in Olympique de Marseille in France.

The derby between River Plate and Boca Juniors is one of the most famous rivalries in world football. Can you please describe the atmosphere surrounding these games when you played for River Plate?

It is the most exciting Derby in the world I am sure of that. The fans get prepared days before and continue the rivalry some time after. During the match you live a unique atmosphere, with the colors and songs of both clubs.

What are the key components of a striker’s physical and mental perspective, and how did you maintain confidence during dry spells?

The quickness and intuition in the eighteen (striking zone), besides being calm to be able to define a play within a decimal of a second. Be very sure of yourself and never doubt.

Which players or coaches were instrumental in your own personal and professional development on and off the pitch?

Growing up in Marseille, Zinedine Zidane watched you play for Olympique de Marseille. He named his oldest son after you. Have you been able to follow the football development of Enzo Zidane Fernandez who is now in the youth sector of Real Madrid?

(At the presentation ceremony of the new River Plate kit, March 2008, with Zinedine Zidane).

I follow him from a distance but I am sure for what I know of him, he has a spirit similar to his father, I am sure that will help him to succeed.

Since GolTV is located in Miami, Florida, you have had the opportunity to witness firsthand the growth of Major League Soccer. In your opinion, how would you evaluate MLS?

At this moment it is starting to develop and I think it is interesting to continue with the idea of bringing more international players to the US so the youth can imitate and learn as well as for the fans to have idols to follow. The next step would be to globalize MLS more with other continents.

As a former player who competed at the highest levels around the world, what suggestions could you share with those who aspire to be professional footballers?

Giving advice is a touchy thing because each individual’s circumstance is different. Based on my experience I think it is important not to make soccer the single one priority in life. One must apply one’s self and study other things and take soccer as the game that it is. Then later one can contemplate going professional. Why I say this, is because reaching professional league play is not only dependent on talent unfortunately. There are other variables such as timing that may be involved. So basically it is important not to put all your eggs in one basket.

I played because it was my passion and I enjoyed it but I had other interests as well until I was 18 when my number was called and I was able to take my passion professionally.

It unfortunately does not happen for all, regardless of talent. Today I see many doing it backwards and concentrating only on soccer as the single one option. I have two children and they love soccer as well…but I can tell you I always have encouraged them that their studies come first. Marco is 18 years old and finds himself in Cagliari (Serie A) at the team’s training center. He is an attacker. He finished his high school studies in Miami, and now lives in Cagliari, Sardinia. His mother and I travel quite often to be with him.

Mr. Francescoli, thank you very much for your contribution to Soccerlens, and all the best wishes for continued success at GolTV.

A special thanks of gratitude to Ms. Deborah Montiel, Director of Marketing, GolTV, for her assistance with this interview.