Despite Liverpool’s disappointing early league position, their general performances have not justified their results so far. Instead, it has been a catalogue of individual mistakes that have meant Brendan Rodger’s side have struggled so much to gain points.

Of the 10 league goals Liverpool have conceded so far in the Premier League, an alarming SEVEN have been caused by errors from their own players.

In their 3-0 opening day defeat to West Brom at The Hawthorns, Zolten Gera’s superb strike gave the visitors an undeserved lead before half time, but Liverpool were still in control of the game.

However, the clumsy dismissal of Daniel Agger, followed by a soft penalty given away by Martin Skrtel, left the away side in tatters, before Romanu Lukaku put the icing on the cake for the home side. It was the first example of many of Liverpool shooting themselves in the foot at decisive moments in games.

The visit of champions Manchester City the following weekend gave Liverpool the chance to redeem themselves, but an excellent performance was ruined by more defensive mishaps. Having taken the lead through Skrtel’s bullet header, City undeservedly drew level after Pepe Reina, enduring his worst spell in a Liverpool shirt, flapped at a cross, with the ball eventually falling to Yaya Toure to poke home.

When Luis Suarez curled home a wonderful free-kick a deserved win looked likely, but Skrtel turned from hero to villain with a shocking back pass that gifted Carlos Tevez an equaliser. Although a draw against the champions was far from a disaster, it was two points wastefully given away. 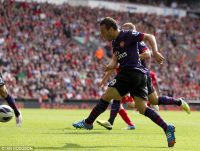 Arsenal traveled to Anfield in early September, and a poor all-round display was compounded by errors by two of the clubs stalwarts over the years. Firstly, captain Steven Gerrard carelessly lost possession in the middle of the pitch, and Santi Cazorla found Lukas Podolski to ruthlessly put Arsene Wenger’s side a goal up.

With the game still finely poised at 1-0, Reina made his second gaffe in a week, allowing Cazorla’s tame strike to sneak under him into the net. It knocked all the stuffing out of the side and they never recovered. While the performance perhaps didn’t merit anything other than a defeat, had those errors not occurred the result could’ve been very different.

After the international break, Liverpool traveled to the Stadium of Light to face a stubborn Sunderland side. The visitors dominated throughout, but an incredibly weak attempt at a tackle by Glen Johnson on Craig Gardner eventually resulted in Steven Fletcher giving Martin O’Neill’s team the lead.

It was the home sides first proper attack of the game, nearly half an hour into it. Suarez did earn a late point with a close range finish with twenty minutes remaining, but their overall dominance was worthy of a comfortable victory, and Johnson’s slack moment cost them dear.

Sunday’s emotional clash with Manchester United was exactly the same in terms of dominance, although this time Liverpool came away with nothing. A terrific first half showing ended badly after Jonjo Shelvey was dismissed, and while it did not cost a goal, it has to be seen as an individual error again.

Whether or not Jonny Evans should’ve been sent off as well is another argument altogether, the bottom line is that Shelvey was reckless and gave his teammates a huge uphill task. Gerrard’s fine strike gave Liverpool a lead straight after the interval, but Rafael’s excellent curled finish leveled the scores.

Although the home side were playing with a man less, they continued to look the more likely to find a winner before indecision between Agger and Johnson allowed Antonio Valencia to pounce, earning a penalty in the process following a despairing tackle from the latter. Robin van Persie gave United the lead, and yet again Liverpool had themselves to blame for making costly errors in a game they had dominated.

Is Rodgers at fault?

Brendan Rodgers has taken stick from some quarters for his side’s current league position, but the truth is he is actually doing very little wrong. Every performance so far has been very good, barring the Arsenal game, and he has got his side playing attractive, possession-based football.

It could be argued that Rodgers’ risky style of play, where Reina and his defence are encouraged to play the ball out from the back rather than hoof it up the pitch, may have resulted in these errors, but that is purely coincidental. To put it bluntly there have just been some very unprofessional moments from players who should know better.

Some people are far too influenced by results rather than performances, and this is exactly the case with Liverpool at the moment. Many are claiming they are a poor side who will finish mid-table without properly dissecting their displays. Granted, they have been far from perfect so far this season, but they should not be in the relegation zone and have actually played as confidently as anyone at times.

They are not having a lot of luck with refereeing decisions, while the woodwork continues to be their nemesis, and you feel that someone could be on the end of a hiding in the coming weeks when everything clicks.

Once Liverpool get a couple of wins under their belt and the mistakes are eradicated, they will fly up the Premier League table.

The author of this article, Henry Jackson, writes on @henryjackson87 and you can also follow @Soccerlens.