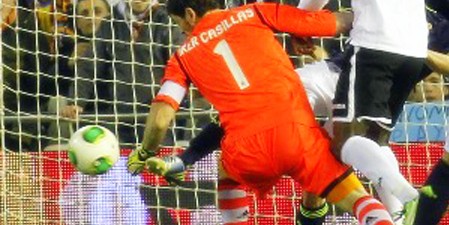 Real Madrid skipper Iker Casillas could miss both the Champions League matches against Manchester United after suffering a metacarpal fracture on his left hand.

Casillas was badly injured in a collision with defender Alvaro Arbeloa who accidentally kicked the hand as he attempted a clearance during their La Liga match against Valencia and couldn’t continue the game out of pain and was replaced by second choice goalie Antonio Adan.

Madrid announced through their official website that Casillas has a fracture at the base of the first metacarpal of his left hand. He is sure to miss the game against Getafe on Sunday and could miss the two-legged Champions League tie with Manchester United too.

Metacarpal bones are the long bones situated above the carpal bones on fingers and is equivalent to the metatarsal bones in the feet. Since, he has fractured the metacarpal bone leading to his little finger, there can be no way he can recover from the injury immediately.

Usually, any fracture on bones takes more than six to seven weeks to recover without surgery. And, if the injury is serious, which is not known as of now, the World Cup winner with Spain could be out for a lengthy period of time too.

He is therefore certain to miss the first leg of the Champions League tie against the Premier League side which will be held on February 13th. He could also miss the second leg on March 5th, depending on the speed of recovery.

Iker Casillas was dropped by manager Jose Mourinho who preferred Adan as the first choice. While Madrid have gone from one extreme to another in terms of off pitch imbroglio this season, the 31-year-old returned to first team action after a brief hiatus.

Surely, one’s absence is another’s gain and United will be more than happy to hear the news of his injury.