Javier Hernandez could be Manchester United’s most important player next season according to the comments of midfielder Antonio Valencia and goalkeeper David De Gea.

Chicharito is in the current process of putting huge pressure on David Moyes to use him from the start of the new season, as he continues to bang in goals for Mexico on a consistent basis.

Hernandez will be facing the very grim challenge of trying to break up the partnership of Wayne Rooney and Robin van Persie if the former doesn’t leave the club this summer.

However, it’s a challenge that Valencia feels his impact at the club will allow him to bear, becoming stronger in the process.

“You can’t say any more about Javier! – What is it this year, 15 goals in 25 appearances? That’s something I think is really amazing. I’m really happy to have him as a team-mate and enjoy working with him every day,” the midfielder told the club’s official website.

His ability to score goals consistently is what could make him the club’s most important player heading into the new league campaign.

He scored ten goals in the Premier League last season and made 13 of those appearances as a substitute, which shows he doesn’t always need a full 90 minutes to produce a goal.

If United build the rest of the side around a tactic which is aimed at creating chances for strikers then Hernandez could easily have the same impact next season as in any season Ruud van Nistelrooy played for the club. 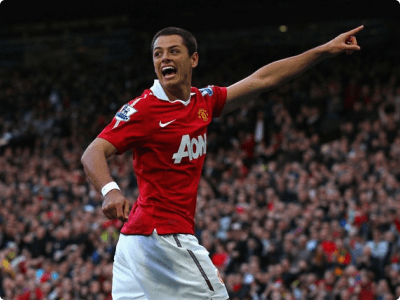 To get his chance in attack and to start, he has to maintain his good form with Mexico and become the most impressive player throughout the pre-season period.

He cannot leave Moyes with any doubts over whether he should be the player starting in the attack of the team and leading the frontline through those important early matches against Chelsea, Liverpool and Manchester City.

His popularity at United is already at very big levels because despite the fact he’s Mexican, he does play with a typically English attitude and charisma.

His passion and desire to just score goals is something which has already made him very popular with the fans and if he maintains his form and his positive attitude away from the pitch, Moyes may decide to show him a little faith.

“In terms of goals scored per minutes on the field, I think he’s the best in the league, and that’s what it’s all about. He hasn’t had many good runs of games but whenever he has featured, he’s always scored,” added De Gea.

It’s also significant for the club that Hernandez has adapted to Premier League football because it’s easy to see how his size could make him a target for the less pure teams in the Premier League next season.

Can Hernandez be Manchester United’s most important player next season?