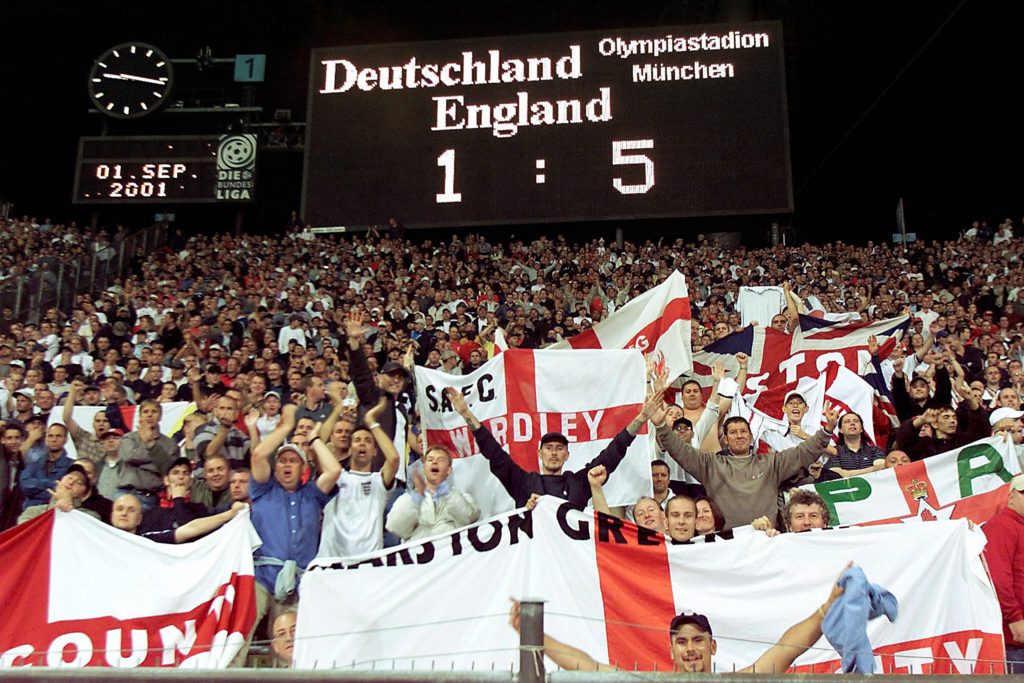 With Euro 2020 now in full swing and nearing the end of the round of 16, there is one standout tie to come at Wembley Stadium on Tuesday afternoon.

Gareth Southgate’s England side have the home advantage as they welcome one of their oldest foes – Germany – to the ‘home of football’.

Whichever side progresses now has a clear path to the final with somewhat of an ‘easier’ route on paper.

We will analyse just how the Three Lions can get past ‘Die Mannschaft’ and look at some key matchups that might be crucial on the pitch.

Let’s first examine why there may be an element of fear sweeping the nation before kick-off.

Going into Tuesday’s tie, England are thought of as the favourites by some, and perhaps rightly so, but to be successful, Southgate’s men are going to have to put history behind them.

Of course, there are the non-football related battles between the two countries that intensify the rivalry, but if we’re focusing on what’s happened on the pitch between the two in major tournaments, it’s the Germans who hold the aces.

Including match-ups with West Germany when the Germans had two different sides both on and off the pitch, England have faced their foes seven times at either a World Cup or a European Championship but have only come away victorious on two occasions, with one being the glorious 1966 World Cup final.

Since then, we’ve seen the Germans knock the Three Lions out of a tournament on no less than four occasions, once in extra time and twice on penalties.

Gerd Müller in extra time at the 1970 World Cup, Stuart Pearce the ‘guilty party’ at Italia 90 missing his penalty in the shoot-out, current boss Southgate having the same fate in the semi-finals at Euro 96 and Frank Lampard’s ghost goal not given in South Africa 2010.

England fans really have had it all against the Germans for some time now, and from an English point of view, it’s about time that tide turned.

Southgate has spoken of his own penalty miss, saying he wasn’t really all that prepared mentally to take one.

If his experience is to have any positives able to be drawn from it, then it’s the fact that he can now help the current Three Lions’ squad be prepared to go the distance if needed.

Hopefully, that won’t be needed at Wembley on Tuesday if England can come out on top in these key areas.

For all the attacking flair that England possess, it has to be said that they don’t look like a team who will go out and score three or four goals against any side, let alone one of the ‘bigger’ and frankly stronger nations than they have already faced.

Consequently, keeping Germany’s front men quiet on Tuesday afternoon will be key to any potential success.

Long-serving manager of the German national team – Joachim Löw – will leave his post after Euro 2020. In his final ‘swansong’, he has opted for an attack spearheaded by Bayern Munich and former Arsenal man Serge Gnabry.

Although the tricky forward is yet to score in three matches at this summer’s competition, he grabbed himself 10 Bundesliga goals in the campaign just gone and is no less dangerous now than he was then.

Even if he doesn’t score, his jinking runs with the ball and intelligent ones off it often open up space for teammates to drift into, so whoever plays at centre back for the Three Lions will have to be wary of that especially considering Kai Havertz – two goals at the Euros to his name already – sits behind him in a ‘centre forward’ role.

Pace will be required to cope with Gnabry and Havertz, so we may even see someone like Kyle Walker drift into the backline to support a Harry Maguire/John Stones.

One of those will be needed as a minimum to deal with the Germans’ threat in the air.

Thomas Müller is back to being a regular starter for his country, and the stature of centre-backs Mats Hummels and Antonio Rüdiger makes England’s alertness defending set-pieces all the more important.

The current German side is ageing in parts, and the midfield is one of those areas, but what lacks in the legs can be made up for by the brain, and the current midfield duo in Löw’s team does just that.

Toni Kroos and İlkay Gündoğan are undoubtedly superb central midfielders in their own right, but put them together, and you have some partnership.

As will be well known to Premier League fans, Gündoğan has developed a new-found goalscoring ability at Manchester City in the last year or so and has managed to grab himself a wealth of goals to help the Blues on their way to a fifth league title in the last decade.

There’s no reason why, given the chance, he couldn’t get one on Tuesday, but the focus – for me – must be more on stopping both him and Kroos from picking out passes through the lines.

If England are to be successful, they can’t be giving either of the two Germans any time on the ball.

Whoever it may be that plays in defensive midfield for Southgate’s men – Kalvin Phillips, Declan Rice, Jordan Henderson or a combination out of the three – must win that battle with support from at least one of the three ‘attacking midfielders’ in front of them on the team sheet.

Sometimes, there is no way to stop players with the quality of Kroos and Gündoğan other than to bring them down and concede a free-kick.

If it’s in the right area of the pitch – i.e., not close to England’s box – then there shouldn’t be a problem with that.

Going the other way, when England’s midfield has possession, they’ve got to make their passes count.

If Southgate sticks with the same formation, then the Three Lions should have a minimum of four players flooding forward on the counter.

Phillips/Rice/Henderson must find one of those because they’re the ones that can create something for the home side at Wembley.

Jack Grealish, Raheem Sterling, Bukayo Saka, Mason Mount or even Jadon Sancho if he is to play. All of them possess the talent to create or score a goal, so the midfield battle will be vital.

Now, while England have the talent to cause damage to the German side, they will certainly have to improve on their form during the group stages.

Captain Harry Kane is an absolute talisman but is yet to score in this European Championships and has come under some criticism, rightly or wrongly, for not doing so.

He will start at Wembley, but he must step up to the plate on the big stage and help to get England over that line.

The other attacking players around him can do the leg work, beating men in one-on-ones and getting the ball to him, so Kane needs to be in the right place at the right time to stick it away.

Aerially, he’s going to have a tough job up against a seismic German defence, but if he can get the ball at his feet, then England could be in business.

For all their height, Tuesday’s opponents lack pace at the back, more so down the middle, and England undoubtedly must exploit that.

As a nation, the Three Lions’ attackers now do have a ‘golden generation’ feel to them, and they’re only just at the start of their careers in the most part.

The game really could go either way – it’s difficult to predict and entirely depends on if and how England take the game to their opponents at Wembley.

Quite honestly, with home advantage and going into the game as favourites, if the Three Lions can get an early goal and have the visitors on the back foot, they could cause real problems for the Germans.

If they don’t allow Löw’s side to get into the game, it could easily be ‘curtains’ for England’s Euro dreams.

Beating Germany would be monumental. Some England fans have never seen it happen at a major tournament.

This means more, so please Gareth, don’t sit back and play for penalties again. We all know how that one ends.