Hodgson has no choice but to back Joe Hart 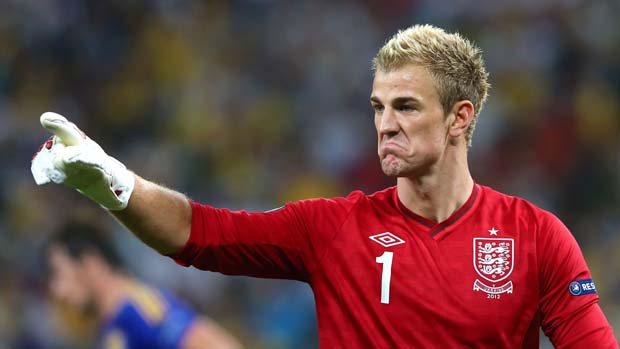 He’s your go to guy. The man you can trust in a crisis. Sure, he’s made a mistake or tow, but then again, who doesn’t? Everybody said the shirt was his for ten years, so just because he’s made a rick or two, it doesn’t mean you should drop him. Does it?

These are the thoughts that must have been swirling around Roy Hodgson’s head as he walked into the press conference following his selection of the England squad for the vital upcoming friendlies against Ukraine and Moldova.  Of course he was going to get questioned about the ‘left field’ inclusions of Everton tyro Ross Barkley, and Tottenham’s young winger Andros Townsend, but these were easily batted away. The big question was always going to be about his goalkeeper.

In typical England manager fashion, Hodgson confidently spoke of Hart remaining his goalkeeper of choice, and that he has full confidence in the player. It’s often been argued that it’s more difficult to get out of the England team than to get into it. With qualification for next year’s World Cup hanging in the balance for the upcoming game, particularly the away fixture in Ukraine, it was a brave call. Hodgson’s colours are now very much pinned to Hart’s mast.

Joe Hart has been the number one of number ones for England for a while now. Even Ben Foster’s return to the fold was stymied by a foot injury rendering any consideration of the West Bromwich goalkeeper merely a matter of intellectual conjecture. The point is that the challenge to hart’s prominence hasn’t come from a rival – that would be a sign of healthy competition for Hodgson – it has come from a sudden apparent frailty in the form of Hart himself.

Doubts arose after a below par performance in the friendly against Scotland and have grown after the shock defeat for Manchester city in Cardiff, with two goals coming from corners that seemed to pick up on a weakness in Hart’s technique. It’s a massive point on Hart’s favour that his club manager is not of the fickle variety. Pellegrini recognised that Hart had not become a bad player overnight, and trusted the player and his coaching staff to work through any problem. Roy Hodgson must have been grateful for the Chilean’s cool hand on the tiller.

It could of course be argued that, with Foster incapacitated, there was little other choice than to back Hart, and that’s as maybe, but should a goalkeeping error cost the national team a point or three in the upcoming double-header of games, it’s inevitable that Hodgson will be called to account for the choice of his number one.