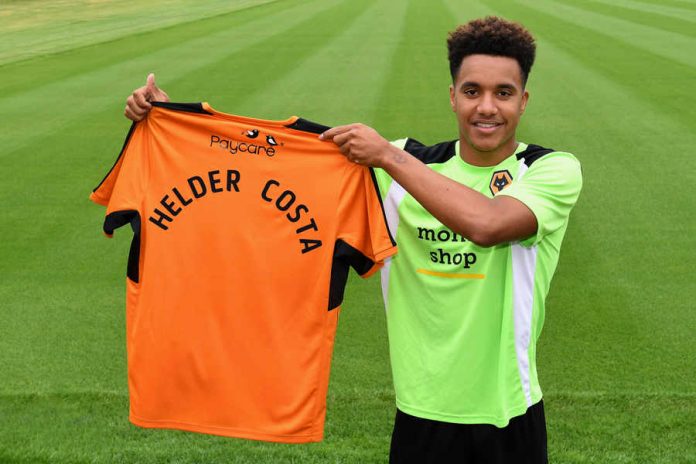 The Sun has reported that Chelsea have joined their London rivals in the chase for Wolves winger Helder Costa. The former Benfica man completed a permanent move to the West Midlands club in January for a club record fee.

Born in Angola, Costa moved to Portugal as a youngster where he joined Lisbon side Benfica in 2004 on a youth contract.

He has represented Portugal at all youth levels, making the 2013 U19 European Championships team of the tournament.

At club level, Costa spent considerable time in the Benfica B-side, only making one appearance for the first-team against Gil Vicente in the Portuguese League Cup.

A string of loan spells followed. His first at Deportivo La Coruna saw him only make six appearances from the bench before he enjoyed a more fruitful spell at French side Monaco. In the principality he amassed 28 appearances, scoring 5 times.

However, when he returned to Benfica, he still couldn’t make a breakthrough into the first-team. It was proving to be a frustrating quest, and last summer he made a third loan move. This time to Wolverhampton Wanderers!

In England, he has impressed greatly in what has been a poor season for the Black Country side. So much so, that in January the club paid a club record fee of £13m (as per reports) to sign him permanently on a four and half year deal.

With 10 goals so far this campaign, he is currently Wolves’ top scorer. A handy tally considering he is a winger, playing in a team battling relegation from the Championship.

Club stalwart Dave Edwards has even described Costa as the best player he has ever played with at the club.

It’s given everyone a boost,” Edwards said. “We don’t know what’s going to happen down the line but to get him as a Wolves player now and to have a contract for four-and-a-half seasons…we’d love him to be with us for all of that and be in the Premier League.

“You’ve got to look at it honestly as well and think if he has this season and next season and we’re not in the Premier League it’s going to be time for him to move. I think the fans would accept that.

“But hopefully we can do it because he is, since I’ve been here, the best player I’ve seen.

“He’s so robust, he takes tackles well, but his pace and his final product…he’s got everything. Benfica must have some wingers if they can let him go!”

Costa rose to the attention of scouts after a mesmerising performance at Anfield in the FA Cup 4th round, as Wolves stunned Liverpool.

The Portuguese’s skill, speed and power have made him one of the stand-out players in this season’s Championship.

However, Wolves will be aware of how difficult it will be to retain his services with some of English football’s big dogs beginning to sniff around.

As per reports from The Sun, Antonio Conte is pursuing Costa after the 23-year old impressed him during Chelsea’s FA Cup tie at Wolves.

The Sun also claims that Arsenal scouts watched the player at the weekend, in Wolves’ 1-0 win over the Championship’s bottom club Rotherham United.

Although, unfortunately for him, Costa missed a penalty in the narrow victory.