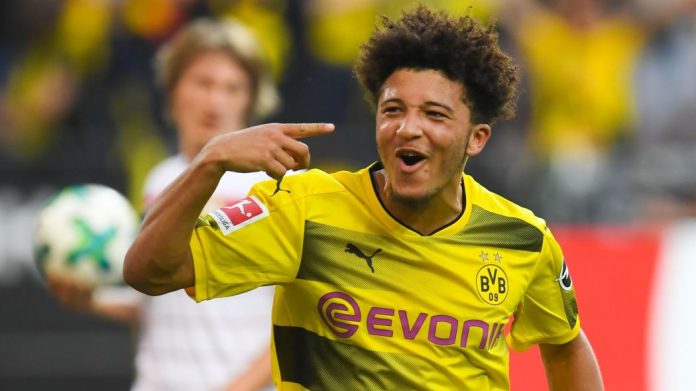 Jadon Sancho has been dominating the headlines for all the right reasons. He became the first player born in this millennium to play for England on Friday night when he came off the bench against Croatia with 15 minutes left.

England drew 0-0 against Croatia, and Sancho seems to have already made a huge impression. The 18-year-old didn’t get enough time to showcase his talent, but he did put in one piercing cross into the penalty box.

Sancho has been training with the England senior players all week, and it seems he has left a strong impression already. And it gets all the more worthwhile when you get a big compliment from a world class player like Harry Kane.

“He’s great,” Kane said, as quoted by the Daily Mail. “Big congrats to him for his debut today, I thought he came on and made an impact as well. He’s been great in training and he has just got to keep working hard and playing games and I’m sure he will have a very bright future.”

Sancho has been on the radar of Spurs for a while and they could reportedly make a move for him next summer.

According to a recent report from the Daily Mirror, Chelsea, Tottenham, Manchester United, Liverpool and Arsenal are all keen to bring the exciting young talent to the Premier League.

Borussia Dortmund are already bracing themselves for bids next summer for the exciting 18-year-old who they believe has got the potential to become a £100million superstar.

It remains to be seen whether Spurs actually make a move for him next summer, but getting high praise from Kane shows the player is on the right track towards greatness.