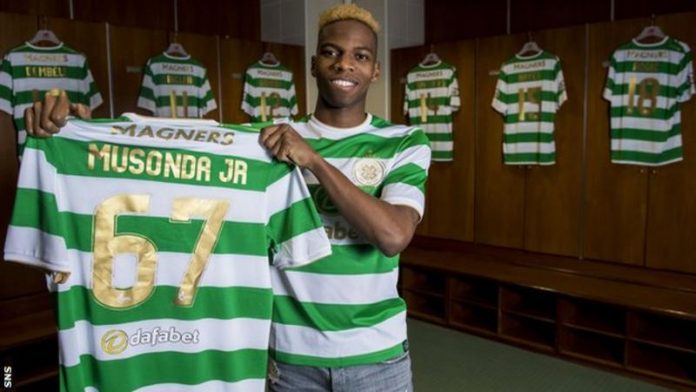 Celtic forward Charly Musonda confirmed parent club Chelsea would be taking him back early from his loan spell at Parkhead and fans haven’t been too happy with the news.

The 21-year-old was expected to be at the club for another 12 months but his inconsistency and lack of playing time has led to the deal being ended prematurely.

Was gutted when I read Chelsea were considering it last week. Watched that assist against Zenit dozens of times in the days following haha. Cracking wee player without a doubt.

Good player but guessing he couldn’t settle in Glasgow at all. Otherwise definitely would have given him plentiful chances next season.

Crazy considering the media frenzy over him

Shame really, I was hoping that a player which made a MOTM performance without even getting on the pitch would have made more of an impact on Scottish football

Hard to gauge if he’s any good in a couple games. Could’ve been a good player in the league but we won’t know one way or the other.

Musonda initially joined Celtic from Chelsea on an 18-month loan in January and made just eight appearances in all competitions for the Hoops. The Belgian u21 international struggled to dethrone the likes of Tom Rogic, Callum McGregor, Olivier Ntcham and Stuart Armstrong from the first-team.

Manager Brendan Rodgers was believed to have beaten out 24 clubs to Musonda’s signature, but he was given so little playing time to prove his worth. The Celtic boss did admit he struggled to adapt to Scotland and may be a better player when he has a full pre-season under his belt, but his future lies elsewhere now.

Chelsea reportedly weren’t happy with the lack of game time given to Musonda and now they will decide what to do with him this summer. The 21-year-old was loaned out to Real Betis for a year in January 2016 and was given far more games to develop than Celtic afforded him.

Next season will be important as Musonda is no longer a hot prospect. Chelsea will want to see some return on their investment from 2012.