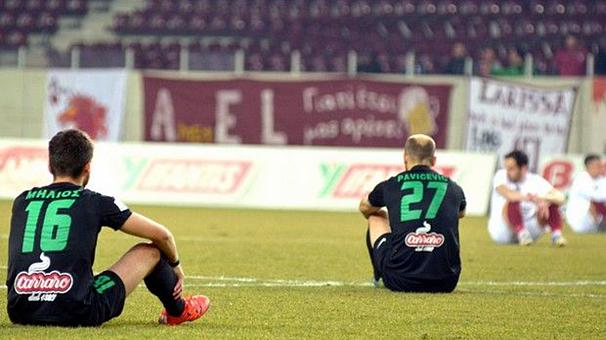 It looked like any other football match was going to occur when second division clubs in Greece, AEL Larissa and Acharnaikos met. However, something odd happened when the referee blew his whistle to begin the match.

All 22 players and coaches of the two teams sat in silence to show solidarity and sympathy with the thousands of refugees fleeing conflict or persecution in Syria and Iraq.

A statement was also read aloud on the PA system before kick-off which criticised the “brutal indifference” of the European Union and Turkish government.

The announcement said: “The administration of AEL, the coaches and the players will observe two minutes of silence just after the start of the match in memory of the hundreds of children who continue to lose their lives every day in the Aegean due to the brutal indifference of the EU and Turkey.

“The players of AEL will protest by sitting down for two minutes in an effort to drive the authorities to mobilise all those who seem to have been desensitised to the heinous crimes that are being perpetrated in the Aegean.”

Greece became the main gateway for refugees who began arriving in Europe last year. Sadly, in order to do so, many undertake hazardous sea crossings in small crafts which are not safe. At least 33 migrants, which included five children, drowned in the Aegean Sea after their boat capsized on Saturday as they too attempted the ill-fated journey from Turkey to Greece.

The gesture to sit down came a day after it was announced by the International Olympic Committee that the flame for the 2016 Olympic Games in Rio de Janeiro will pass through the Eleonas refugee camp in Athens, and one refugee will also be included in the torch bearers.

The International Organization for Migration announced on Friday that 244 migrants, out of 55,568 arrivals, had drowned so far this year. Several Premier League clubs have also donated small percentages of match day revenue to the crisis efforts.

The Greek teams’ action was unsurprisingly greeted with applause and unanimous approval from the fans in the stands, and later from the world community who appreciated the touching display.