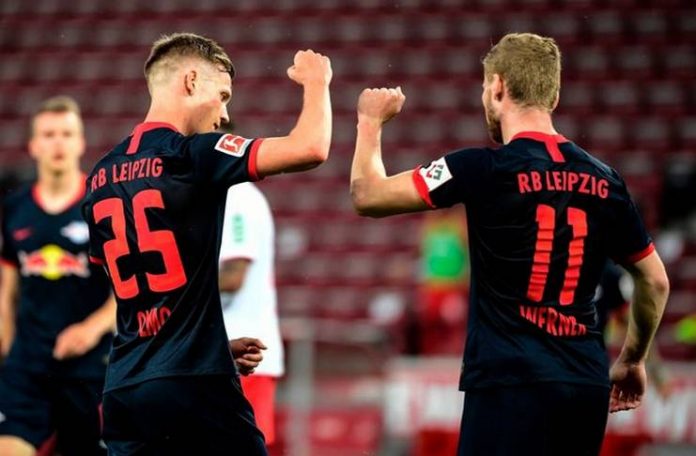 Leipzig went to Köln, knowing that a win would put them back up to third in the Bundesliga table.

It was the Cathedral City side which went ahead in the 7th minute, as Rexhbeçaj’s finish bounced back off the post to Córdoba, who thumped it home.

But after Córdoba picked up a knock, Leipzig made the most of their temporary numerical advantage, and scored after Angeliño’s cross was headed in by Schick.

The away side dominated the rest of the first half, and went ahead after Nkunku delightfully finished by chipping it over Timo Horn.

The second half started in the same way, when Gulácsi picked up an assist for sending Werner through, as the German slotted it past Horn.

Köln pulled one back though, as Modeste curled an effort into the corner from outside the box.

But two minutes later, the previous goalscorer made a mistake to give Olmo the chance to do the exact same thing after a corner, and the Spaniard did not fail.

Leipzig had a few decent chances for the rest of the match, but they failed to take them.

Köln had one last chance in 87th minute when Skhiri sent Modeste through on goal, but he failed to score.

So, a chaotic game drew to a close with a scoreline of 2-4 to the visitors.

As always, Köln looked to use Córdoba as a target man, and the Colombian caused all sorts of problems for the Leipzig defence. But, after he had to be withdrawn due to an injury, they didn’t have any back-up plan, as Modeste couldn’t quite have the same effect.

Leipzig, on the other hand, reverted to a back 4, and they played through midfield early on. After Köln started pushing, they employed their lightning-quick counterattacks to punish the home side.

Upamecano vs Córdoba – The striker did well to beat Upamecano to the ball for the first goal, but the defender had his revenge later on when he (inadvertently) challenged and injured the Colombian striker.

Timo Horn – Decent in terms of goalkeeping, but should have swept up Gulácsi’s ball to prevent Werner’s goal. 6.25.

Benno Schmitz – Couldn’t do much to stop Nkunku or Angeliño. 4.25.

Toni Leistner – Decent at the back, but was beaten aerially by Schick. 5.5.

Rafael Czichos – Great to see him back, and he put in an acceptable performance in defence. 6.

Noah Katterbach – Very lively at left-back, as he contained Olmo for most of the match. 6.5.

Ellyes Skhiri – Decent in midfield, as he made challenges and picked a few good passes. 6.75.

Jonas Hector – Battled in the middle of the park, but was overrun by Laimer and Sabitzer. 6.25.

Florian Kainz – Not a great match for him. He was nowhere near Angeliño for most of the game, and his set-piece deliveries were sub-par as well. They even cost his side for Leipzig’s third goal. 4.5.

Elvis Rexhbeçaj – Did very well to provide Córdoba with the chance to score, but couldn’t do much thereafter. 5.

Jhon Córdoba – Scored a goal with a thumping finish early on. Troubled Upamecano until he picked up an unfortunate injury. 6.75.

Subs:
Anthony Modeste – Didn’t have the same effect as Córdoba, but scored an absolute stunner. Made a poor clearance immediately thereafter to undo his goal. Had a great chance late on, but he put it wide. 6.5.

Dominick Drexler – Not far better than Kainz, and was very close to picking up a red card after a poor challenge. 4.75.

Jan Thielmann – Failed to make much happen after coming on. 4.5.

Team – Köln started off well, even going in front. But, after Córdoba went off injured, their performance plunged, as Modeste tried but failed to fully plug the hole left by the Colombian. Either way, they were decent in front of goal, but very leaky at the back, which is what cost them. 6.25.

Péter Gulácsi – Should have done better to prevent the first goal. His distribution wasn’t great, but he actually got an assist for Werner’s goal. 6.5.

Nordi Mukiele – Did well in possession, and kept Jakobs quiet for most of the match. 6.75.

Lukas Klostermann – Worked very well with Upamecano, and used his pace to remove the counterattacking threats. 7.

Dayot Upamecano – Very strong at the back, as he made lots of crucial tackles and contained Modeste. 6.75.

Angeliño – Set up the equaliser with a brilliant cross, and wreaked havoc down the left flank. He was very alert defensively as well. 7.75.

Marcel Sabitzer – Great in midfield, as he kept Hector and Skhiri quiet. Should have scored late on, but he went for the cute finish, which failed. 7.25.

Konrad Laimer – Was strong in midfield, and set up Nkunku with a brilliant pass. 6.5.

Christopher Nkunku – He worked very hard, and put his side in front with a delicious chip. 7.

Dani Olmo – Wasn’t too lively, but got his side’s last goal through a brilliant finish. Could have added to his tally later on but he only found the side netting. 6.5.

Timo Werner – Wasn’t too lively up ahead, but scored from a lightning-quick counterattack. Should have scored a second when he was through again, but he fired it high. 6.25.

Patrik Schick – He was an aerial presence as always, as he got his head to the ball everywhere – both in attack and defence, He even got a goal with a great header. 7.5.

Subs:
Tyler Adams – Very good in midfield since he came on, as his distribution and recoveries were great. 7.

Amadou Haidara – Was very lively after he came on, but couldn’t get on the end of anything. 6.5.

Team – Leipzig weren’t great early on, but got far better after they scored. They ran through their opponents in midfield, and were clinical in front of goal as they scored four. They won’t be too pleased about conceding two though. Towards the end, they failed to take their chances, but luckily, they didn’t have to pay for it. 7.

Köln’s lose for the second time this week, dropping them to 11th place in the Bundesliga, leaving them 7 points clear of the relegation zone. They will probably end the season somewhere here.

Leipzig, on the other hand, move up to third place with this win, keeping their Champions League stronghold. They have 2 points between themselves and the two teams below them – Gladbach and Leverkusen.