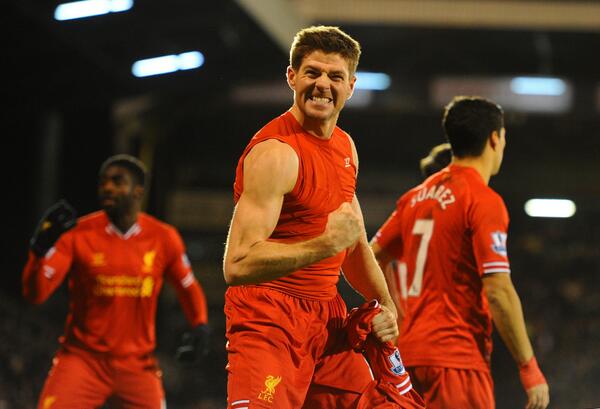 Liverpool captain Steven Gerrard feels the Reds have passed a significant test, after beating Fulham 3-2, on a windy night at the Craven Cottage on Wednesday.

The Reds captain scored the match-winning penalty right at the death, as Liverpool not only consolidated their position in top four but also closed the gap with other contenders.

In the past, Liverpool have often failed to maintain the same tempo and result against weaker teams, despite playing well against top oppositions. The Reds were heading into this match on the back of a 5-1 victory over Arsenal and therefore this victory was so ‘significant’ for Liverpool.

Not only they bury their old ghosts, but the players showed great character and determination as well. Gerrard said to Liverpoolfc.com:

“Against Arsenal, we showed how much class we’ve got. We showed we’ve got talent all over the pitch; at home, with the atmosphere behind us, you don’t have to motivate yourself – you just go out and perform, and more often than not you play well.

“But coming away on a Wednesday night, windy, on a difficult pitch, away to Fulham is a big test for the team. We’ve passed it but we still have to learn from our mistakes and defend better on the road if we’re to finish in the top four places.

“We’re in the mix. It’s still early days, there’s a lot of football to be played and we’re not going to get carried away. But we are in good form. We feel as if we’re dark horses.”

Against Fulham, young academy midfielder Joao Carlos Teixeira was given his senior debut when he came on in place of Raheem Sterling.

Gerrard has praised the 21-year-old, who received strong backing from manager Brendan Rodgers as well.

He added: “I watched this kid a couple of years ago playing for Sporting Lisbon against Liverpool at Anfield in a youth game; I could see straight away he was the best player on the pitch.

“Credit to him, he has kept working hard. He has been invited to train with the first team. He is competing, he is trying to improve and learn. He listens – I’ve just been speaking to him in the dressing room and you can see he wants to learn and listen.

“He has got respect for the other players in the dressing room. This is the start for him now; I’ve just told him that he needs to push on, keep learning and building on what he has just achieved. He deserved his debut and he made a special tackle which helped us get over the line.”

Liverpool will have to shift his attention now the FA Cup, as the Reds will now travel to London to face Arsenal this Sunday.