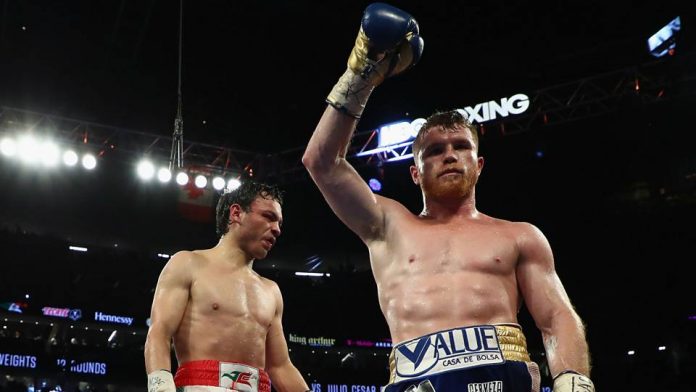 Saul ‘Canelo’ Alvarez‘s fight with Julio Cesar Chavez Jnr was billed as the ‘Battle of Mexico’ by none other than Canelo’s promoter, the iconic Mexican-American fighter Oscar De La Hoya. This brought back memories of highly entertaining slugfests between Mexican fighters – think Erik Morales’ trilogy with Marco Antonio Barrera and both of their fights with Juan Manuel Marquez.

Unfortunately this fight failed to live up to the hype as it turned into a one-sided beating.

From round 1 it was clear that Canelo was far superior in every department – hand speed, shot selection, power punching, footwork, foot speed, defence, outside fighting and inside fighting. He was simply too good for Chavez Jnr.

As each round came and went, a pattern emerged with Canelo dictating the pace of the fight. Canelo was always on the front foot pushing the taller, bigger, heavier man back with an accurate jab, quick combinations and slick counter-punching. Chavez Jnr looked lost in the ring. He had no idea how to turn the tide of the fight. Even when he tried to impose himself on the inside, Canelo was too strong and too fast; finishing each exchange with the cleaner and more eye-catching punches.

It was so easy for Canelo, he was even standing up between rounds.

Boos rang around the arena as the fight reached its conclusion. The fans of Chavez Jnr hugely disappointed with his pathetic performance. Once the final bell rang at the end of round 12, the result was inevitable. The judges gave every round to Canelo with the three scorecards reading 120-108 in his favour.

Gennady Golovkin – the current IBF, WBC and WBA World Middleweight champion – then entered the ring and it was confirmed by Canelo that he would fight Golovkin next on September 16.

The crowd erupted in jubilation at this announcement. Fight fans around the world had been calling for this bout since Canelo’s victory over Puerto Rican legend and four weight world champion Miguel Cotto in November 2015 for the WBC World Middleweight title.

The upcoming fight between Canelo and Golovkin will be an intriguing contest between two of the world’s best fighters. Can Canelo end Golovkin’s dominance or will Golovkin prove once again he is an unstoppable force at middleweight?

Golovkin will look to force the pace with his stinging jab putting Canelo on the back foot. Then bully Canelo with his naturally bigger size pushing him onto the ropes were he can do most of his damage with unorthodox overhand punches to Canelo’s head and deadly body punches.

In contrast, Canelo will want to take the centre of the ring and set a slow pace using his excellent jab. This will allow him to time his shots and set traps for Golovkin which he can then expose with his counter-punching and body shots.

So whoever can impose their style on the other, on the night, will win the fight.

It is likely Golovkin will start more aggressively but with caution, winning the first 3-4 rounds. After that I expect the younger, fresher man in Canelo to take over. His clever work to the body and well-timed counter punches slowing down Golovkin.

Both men have great chins and courage, so a knockout is unlikely despite both having huge punching power.

A points decision win for Canelo in a close, competitive fight, is the best bet. My view is that Canelo will win six rounds to Golovkin’s four with two even rounds. That’s a scorecard of 116-114.