Since Paul Gascoigne retired from Football he has spectacularly failed to fill the void left by the lack of structure, training and the purpose he found as a professional footballer and the satisfaction one feels when practising your preferred vocation. 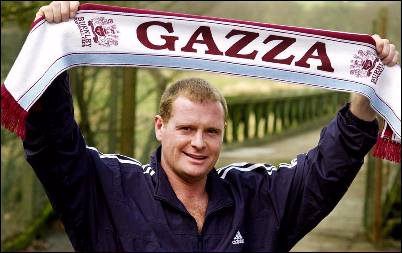 For the past twelve years, he has turned to drink and vices in order to fill in his time. His successful career as a Football superstar meant that Gazza left Football a rich man and in constant demand from fans, who see the question “Can I buy you a drink?” as a way of thanking Gazza for being their hero.

Financial success during his career allowed Gazza to do as he pleases, without the need to look for work. Unfortunately this led to him drifting through his post-football life, looking for the purpose he lost since his footballing days ended and, so far, he has not found anything apart from socialising to do this. Boredom, as well as his addictive personality has been the root cause of his subsequent struggles.

Gazza is adored by the public for showing his emotions during the World Cup in 1990 at a time long before it was alright for a man to cry. His ongoing vulnerabilities show he is a real human, albeit one who was blessed with amazing talent. Normal people can relate to him and everyone routes for Gazza to overcome his demons, but with each report of excessive drinking and emergency intervention from family and his peers, comparisons grow to another flawed genius, the late George Best. On many occasions Gazza has gone onto television to discuss another new beginning, only for the almost inevitable relapse to come soon after. A recent relapse lead to multiple organ failure in America, almost taking his life.

Reports this week suggested that Gazza did not watch England qualify for the World Cup because he was engaged in another prolonged drinking session. This report suggests that even Football now comes second to having a good time with the endless stream of hangers-on who just want to be around a man who used to mesmerise the world. He continues to mesmerise us, but for the wrong reasons.

However hopeless having faith in Gazza appears to be, as a fellow north eastener I hope that Paul can find some restraint in his life and engage in a productive purpose away from Football, a sport in which he shone very brightly, but left behind long ago. I believe he drinks in nostalgia and it is time to move on, before it’s too late.