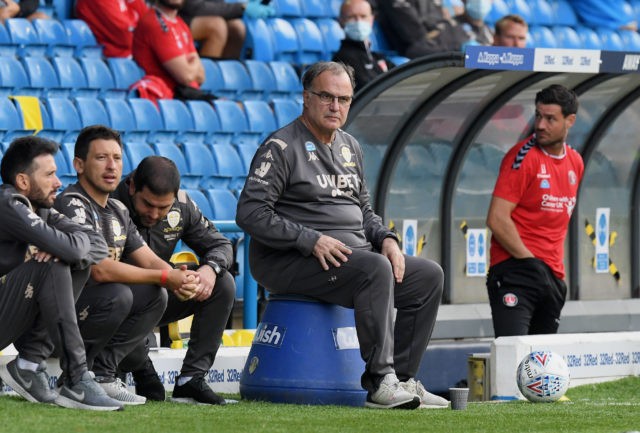 The brand new Premier League season is set to begin from today, with newly-promoted Leeds traveling to Anfield to face the champions, Liverpool.

The Whites are making a return to the top-flight after a long gap of 16 years, but Premier League fans are eager to see how they perform after their mesmerizing performance last season in the Championship under Marcelo Bielsa.

Lineker has claimed that of the three newly-promoted clubs, the other two being West Bromwich Albion and Fulham, Bielsa’s side have a better chance of staying up.

Lineker has said that he’s fascinated to see how Leeds perform under the Argentine in the Premier League.

Leeds lost against the Gunners in the FA Cup but they left a strong impression in that match. The BBC pundit has claimed that there is ‘something of the ‘mad genius’ about’ Bielsa.

“Of the new boys, I think Leeds have the best chance of staying up,” wrote Lineker for The Sun.

“It’s great to see them back in the top flight after a 16-year absence and I’m fascinated to see how manager Marcelo Bielsa does.

“There is something of the ‘mad genius’ about the Argentine but his team were brilliant against Arsenal in the FA Cup last season.

“I can’t wait to see more of them against the big boys and what a way to start for them — away at Anfield, the home of the champions.”

Leeds have been impressive in the summer transfer market, having signed two quality players in the form of Robin Koch and Rodrigo, with the latter being the club’s record-signing.

The Whites are expected to further delve into the transfer market with Leeds owner Andrea Radrizzani claiming they have some £35-50m left in their kitty to spend.