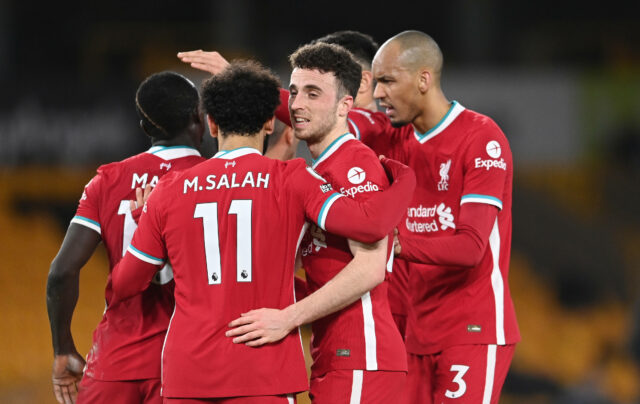 Garth Crooks has showered heaps of praise on Diogo Jota after Liverpool won 1-0 against Wolverhampton Wanderers in the Premier League at Molineux on Monday.

Jota, who recently returned to action after a long injury lay-off, scored the only goal of the match as Liverpool picked up all three points to rekindle their top-four hopes.

Crooks has suggested to BBC Sport that the Reds could still be in the title race had Jota not been injured and continued playing during their tough times.

Jota joined Liverpool in the summer transfer window for a reported fee of £41 million from Wolves, and he has been simply superb in his first season at the club.

Crooks has labelled him as an “inspired signing”, suggesting that he could have impacted more had he been on the pitch during their months of struggle.

“I enjoyed this fixture – Liverpool played like a team that wanted to win the game, and Wolves looked like a team who had no intention of letting them,” said Crooks to BBC Sport.

“The difference between the two sides was the man who Wolves sold to Liverpool last summer.

“Going back to your old stomping ground and facing your former team-mates is never easy, but Diogo Jota made it look that way.

“His goal was well taken and enough to put the Reds back on track. Jota has been an inspired signing, and had it not been for injuries to the Portugal international, Liverpool might still be in touch with another title challenge.”

Jota was in terrific form for the Reds, both in the league and in Europe, before getting injured.

He scored a hat-trick against Atalanta in the Champions League and was regularly contributing with goals and assists in the league, especially when Roberto Firmino was struggling with his form.

Manager Jurgen Klopp was impressed with Jota’s performance, saying he showed his ‘class’ on the pitch.

Liverpool are a dynamic team with Jota in the side, and Firmino may find it difficult to break into the starting line-up when he returns from injury.

In other news, Liverpool have joined Manchester United in the race to sign Serbian defender Nikola Milenkovic.