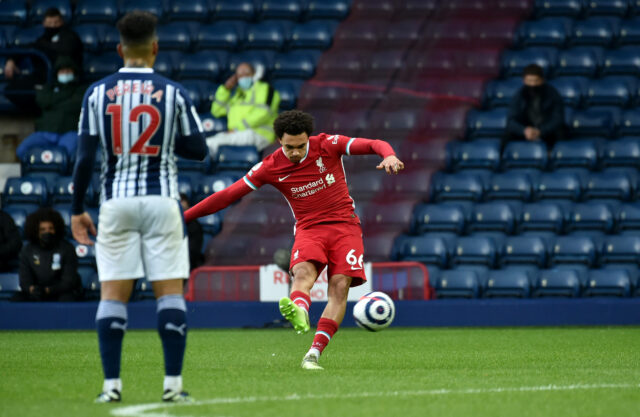 Garth Crooks has showered heaps of praise on Liverpool right-back Trent Alexander-Arnold after picking him in his Team of the Week.

Liverpool earned a 2-1 victory against West Bromwich Albion at The Hawthorns on Sunday.

Just when it seemed like the visitors will have to settle for a draw, Alisson scored one of the most crucial goals for the club this season to seal all three points.

The Reds goalkeeper rose to glance Alexander-Arnold’s cross into the net in the dying seconds of the match.

Crooks was full of praise for the young defender, claiming he has returned to his best form.

He said to BBC Sport: “It was Trent Alexander-Arnold’s corner kick in the last minute of stoppage time that found the head of Alisson of all people.

“The goalkeeper may just have saved Liverpool’s season with an astonishing goal.

“Against Manchester United in their rearranged fixture last Thursday, Alexander-Arnold was also back to his best.

“There was one stage of the game where he was sending balls into the United box from every conceivable angle. When the full-back is playing like this, there is no stopping him.

“I wonder what Gareth Southgate thought about his performance, having left him out of the last England squad?”

This has been a difficult campaign for Alexander-Arnold. He struggled with form and injury in the first half of the campaign and was even dropped from the England national squad.

However, he has been nothing short of sensational in the past few months and has helped Liverpool climb up the table.

He was outstanding against United and made another significant contribution against the Baggies.

He could also have got on the scoresheet but failed to hit the target in the second half.

With two games left to play, Liverpool can make it to the top four if they win their remaining games, with Chelsea set to face Leicester City in midweek.