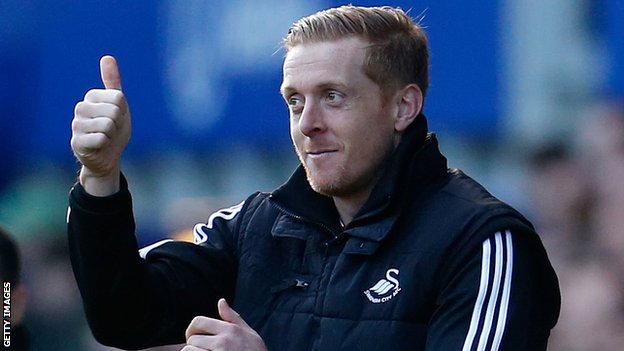 In football, teams win trophies, whereas individuals receive awards. That is one truism. Another is that of those in the race for the Premier League’s Manager of the Season award, there is one individual who deserves a great deal more recognition than he is currently receiving—and that individual is the Swansea City boss Garry Monk.

With odds as high as 50/1, Monk is an unfancied longshot as far as most bookmakers are concerned. Just consider this, however: In his first full season as a Premiership manager, Monk is poised to take a true minnow of the English football league to a top ten finish in its top flight—a top flight often described as the most competitive in world football. Monk’s Swansea have already surpassed their best ever points total, and are on course to achieve their highest ever league finish, too. That alone is enough to make Monk a serious contender for managerial honours.

First appointed as interim player-manager after Swansea—following a slump in form which left them perilously close to the relegation zone—parted company with Michael Laudrup in February 2014; then made permanent manager that May, despite steering Swansea to safety last season, at the start of this campaign former-club-captain-turned-club-manager Monk was among many peoples’ favourites for the sack. Some—the ever-mischievous Robbie Savage included—were even tipping Swansea for a return to the Championship.

Yet Monk and his team have nevertheless defied their doubters, in the process taking several major scalps, including victories over Arsenal and high-flying Southampton, not to mention the magnificent double over Manchester United.

In fact, so good was Monk’s start to his first full season in charge—a perfect three wins from three, including that famous opening day victory at Old Trafford—that he was voted August’s Manager of the Month. Eat your heart out, Louis van Gaal!

Factor in that Monk has achieved all this while keeping his Swansea side committed to the attractive passing football for which they have become famed, and that he has also not had the privilege of spending exorbitant sums on transfers and wages, instead developing the squad he inherited while scouring the transfer market for bargain additions (of which Spurs reject Gylfi Sigurdsson is doubtless the pick of the bunch)—and you are left with a record which positively screams out for consideration for managerial honours. Monk’s unexpected success at Swansea is certainly more than a match for the achievements of any of the other contenders for Manager of the Season.

Does, for instance, the Chelsea manager and current frontrunner José Mourinho boast a better record? Mourinho looks almost certain to guide his side to the title. Yet to some extent his expensively-assembled, star-studded Chelsea team have fallen well short of the early season hype, and with every passing week gain fewer plaudits for their defensively-minded, win-at-all-costs brand of football.

What about Ronald Koeman at Southampton, who like Monk has also overseen a record-breaking campaign? Well, it’s worth remembering that Southampton are only a league place above Swansea, despite spending twice as much in the transfer market. Some may counter that Southampton have spent more because they sold more. Yet Swansea have seen a number of big names depart, too, including star striker Wilfred Bony, whose January sale has been weathered with surprising ease. And of course this is to say nothing about the differences in managerial experience between the seasoned Koeman and the rookie Monk, who at just 36 is the Premiership’s youngest manager.

There are other contenders in the race for Manager of the Season—the likes of Alan Pardew, whose success at Crystal Palace must be qualified against the fact that he left behind a Newcastle team mired in problems, at least some of which can be partially laid at the former gaffer’s door. In addition to Tony Pulis at West Brom, who’s performed another relegation-avoiding minor miracle, just as he did at Palace last year. ‘Is that the magician’s only trick?’, a less awestruck audience might ask this time around.

Meanwhile, if either Leicester’s Nigel Pearson or Burnley’s Sean Dyche manage to keep their teams in the Premiership, then they too would be in with a strong shout for managerial honours. Yet even if they do escape the drop, it is difficult to see how a case could be made for either over Monk. Avoiding relegation is what both sides are aiming for, whereas Swansea finishing in eighth would represent a truly superlative achievement which eclipses all pre-season expectations, modest as they were.

Suffice it to say, more than a few eyebrows will need to be raised if Monk is overlooked for Manager of the Season, especially if this is in favour of a bigger name in charge of a bigger club, who with greater resources have nevertheless not overseen anything like the record-breaking season Monk has. This is one dark horse who deserves the spotlight—and the plaudits, too.