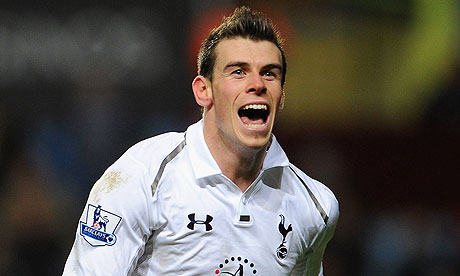 The PFA Players’ player and Young player of the year Gareth Bale is said to be in negotiations with Tottenham’s representatives over a new contract deal.

The 24-year old has been linked with a number of sides across Europe after a season of personal success, but his manager Andres Villas-Boas is keen to fend of interest and keep the forward with the London side at least a further season.

‘At the moment we are confident. The player is under contract, a good contract at Tottenham, which was done last year. It’s something we are speaking about but we don’t have any further developments.’

La Liga runners-up Real Madrid have been the favourites to procure the Welsh international’s signature this summer, and subsequently the Madrid supporters have been licking their lips over the prospect of having both Gareth Bale and Cristiano Ronaldo playing on opposing flanks next season.

However, no official bid has been made for the 24-year old, and Tottenham have been quick to slap a £60M price tag on him.

Last season, Bale scored 22 goals in 33 games in the Premier League. He was the side’s standout player, but couldn’t propel Spurs to a Champions League finish. Many felt it could be the side’s failure to compete in the top European competition that would potentially see Bale seek a fresh challenge elsewhere, but Tottenham are remaining confident they can hold on to him.

‘He’s a great player and if he stays it will be fantastic. I am sure he will stay because he’s still here. He is a draw for other players to come here. Good players want to play with other big players. It’s a big club and hopefully he’ll stay and we’ll bring in a few other good players.’ – Tottenham teammate Gylfi Sigurdsson.