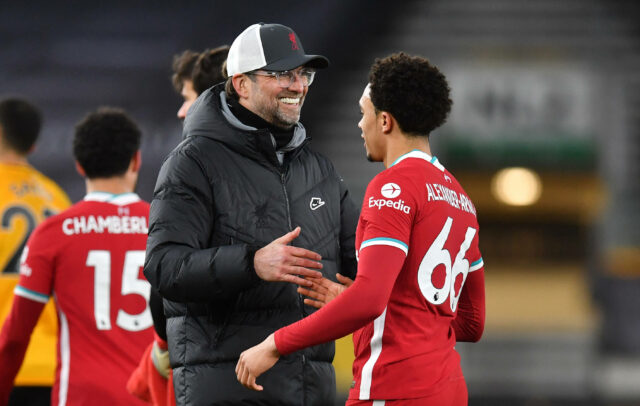 Popular football pundit Gabby Agbonlahor has suggested that Liverpool defender Trent Alexander-Arnold will not be in the England squad for the European Championships.

The Liverpool right-back was dropped from the England squad for the recent World Cup qualifiers, with Gareth Southgate not entirely convinced with his form.

The 22-year-old, who is on £75k-per-week wages at the club, produced a fantastic performance against the Gunners as Liverpool won 3-0 at the Emirates Stadium.

The local lad from Liverpool produced a stunning cross for Diogo Jota who scored the opening goal of the match after coming on as a substitute.

He was also involved in the build-up to the final goal, also scored by Jota.

Former Villa striker turned popular football pundit Agbonlahor has claimed that Alexander-Arnold is not good defensively, and Southgate might feel he has better players at right-back.

🤔 “Trent is very good going forward but not so much defensively.”

❌ “I don’t think Trent Alexander-Arnold makes the England squad for me.”

Liverpool boss Jurgen Klopp has suggested that Alexander-Arnold is a world-class player and that he is in fantastic shape at the moment.

At the same time, the Reds boss has insisted that he respects Southgate’s role and decision and that he doesn’t want an argument with him.

Klopp said to Sky Sports: “I am not criticising Gareth Southgate, and I don’t want to have an argument – I respect his role and his decisions.

“But I know the player better than anybody else, any other coach, and I can say that he is a world class player, and not only offensively.

“Does he perform always world class? No. I don’t know a player who is doing that, but it is his potential.”

Alexander-Arnold suffered from a loss of confidence earlier this season, but it seems he is gradually returning to his old best.

In other news, check the Real Madrid vs Liverpool preview for the Champions League QF clash.