The transfer saga involving Manchester United and Real Madrid is just getting interesting. And promises to be a cracker. And could be one hell of a transfer window, if things go ugly. Take a look at this Front page story from AS: 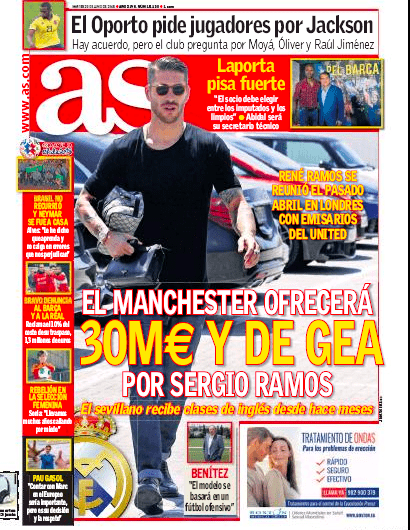 The Guardian’s Sid Lowe reported that Manchester United are considering the option of signing Sergio Ramos, and could be willing to submit an offer to Real Madrid including David de Gea as a part of the deal.

Ramos has a reported buy-out clause over €180m, but with the player having two years on his current contract to run down, United feel they could sign the 29-year-old defender at a lesser price.

Sergio Ramos leaving Real Madrid? It is simply unthinkable! However, AS claim that situation has changed over the past few months. They published an article yesterday where they claimed Ramos could leave the club. He was angry and felt the club had leaked information of him leaving the club, to the press in order to make him look bad and greedy.

He is also upset that Madrid didn’t come out and defended him when news leaked of him being offered to Barcelona. The Spaniard expected more from the club, to defend his name, or to claim that they’d never sell to their rival. He doesn’t want to leave in terms similar to Casillas, where the feeling between the player, club and fans is cold.

The report claim United have met with Rene, Ramos’ brother, in a London hotel back in April, when the club registered their interest in signing him. Ramos has been taking English classes in recent months in case he had to leave Spain.