Arsenal defender, Mathieu Debuchy, is expected to leave the London giants this January when the transfer window opens. The French international has dropped down the pecking orders at Emirates and is the third choice after the likes of Bellerin and Jenkinson, now.

Debuchy is thought to be frustrated and surprised by Wenger‘s decision to pick Jenkinson ahead of him. It is understandable that Bellerin is preferable, but Jenkinson’s selection ahead of him is, frankly, questionable.

L’Equipe have published a new report claiming that Manchester United submitted an offer to sign the French defender in 2015. Back then, Wenger blocked the move to a direct rival. 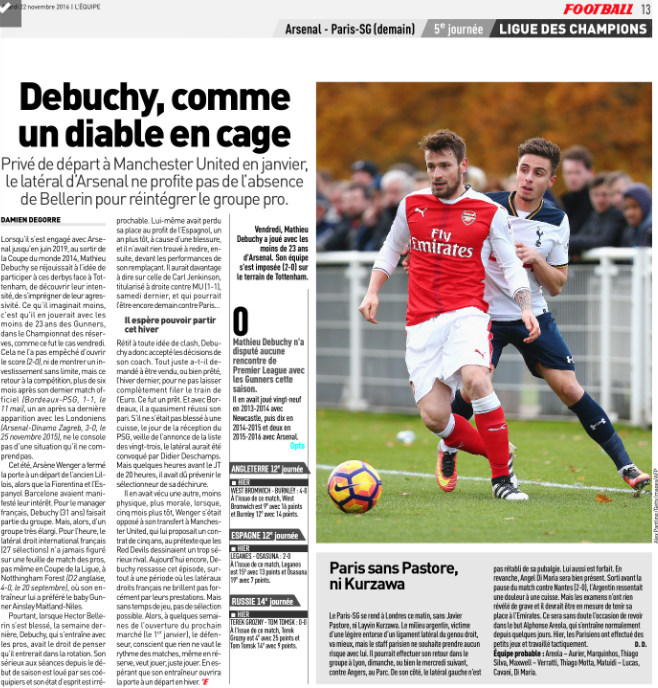 Apparently, Louis van Gaal wanted to sign the Frenchman and had prepared a five-year contract for him. Debuchy was 29 years old back then, and a five-year contract offer was quite strange from United’s perspective. The French defender was never going to be cheap, and United would be stuck with an expensive fringe player had the move gone through.

Now that Van Gaal is gone, United are not expected to renew their interest in January. However, it is no secret that Mourinho needs to sign a right-back.

Following an injury to Valencia, the Old Trafford outfit have been forced to play the out-of-favour Italian defender, Matteo Darmian. Therefore, Mourinho could be looking to improve the depth in that position when the window opens.

Debuchy needs a move away from Emirates to kick start his stagnating career, and if the opportunity to join United presents itself once again, the Frenchman should seriously consider forcing a transfer. Although, he might have to drop down to the bench at Old Trafford as well, once Valencia returns.