Liverpool have officially agreed that talisman striker Luis Suarez will join Barcelona in the summer, though neither of the two clubs have disclosed the amount.

Quite predictable that Liverpool will use (£75m or €81m – whichever version you believe) the full money received for Suarez on buying quality players, as Brendan Rodgers vowed to perform better than last season. A gentle reminder, last season Liverpool finished second in the Premier League. 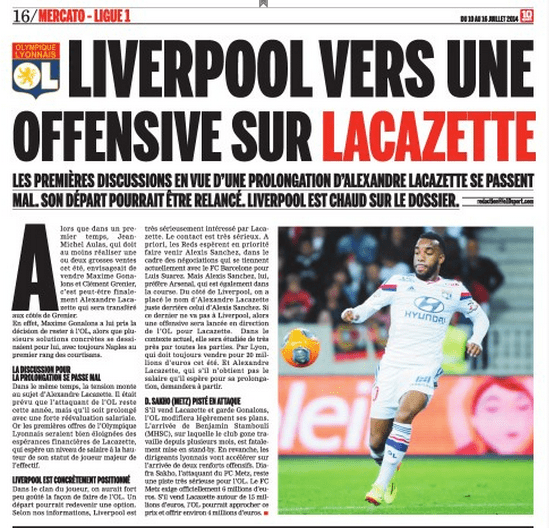 Liverpool have already signed attacking players like Adam Lallana, Rickie Lambert and are close to completing a deal for Lazar Markovic as well. However, according to reports from France, Liverpool are keen to add one or two more forwards to their ranks.

Last month, Sky Italia reported that Liverpool are in talks with the representative of Bayern Munich midfielder Xherdan Shaqiri, but it seems such interest have cooled down. According to Le 10 Sport magazine in France, Liverpool have shifted their attention to Alexandre Lacazette, who plays for Lyon.

Actually, when the article was written for the magazine version before Alexis Sanchez’ move to Arsenal was completed. So, they claim, should Liverpool, who were also interested in Sanchez, fail to sign the Chilean, they would make a move for the French forward. He is valued at €20m, but Liverpool are unsure about the price tag of the 23-year-old. Last season he scored 15 league goals for Lyon in the league and bagged three assists as well.