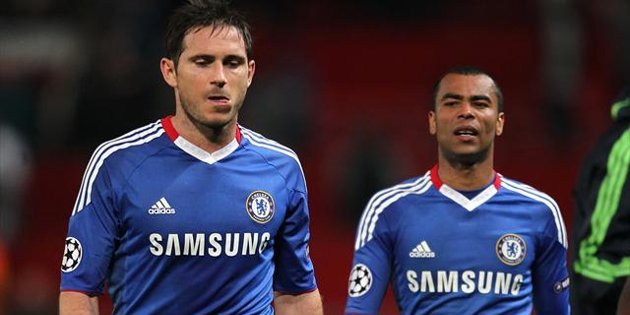 Long-serving Chelsea duo Frank Lampard and Ashley Cole have been released by the club, with the official Premier League website publishing the full list of all players retained and let go by all clubs in the top flight.

The pair, who have starred together in West London for the past eight years, were placed under the ‘free agents’ category in the official retained and released list.

It was widely expected that Cole, 33, would be leaving Stamford Bridge in the summer following the expiration of his contract; but the news that club legend Frank Lampard will go with him will shock Blues fans the world over.

The 35-year-old, who will be England’s vice-captain at the 2014 World Cup in Brazil this summer, was widely expected to sign a one-year contract to stay at the club, following captain John Terry in extending his stay at Chelsea.

But up until now, there has been no movement towards a new deal, and rumours of a potential move to the MLS will now engulf the media.

Chelsea fans should find solace in the fact that, while Lampard may have been officially released, it does not stop him signing a new contract at the club. The same goes for Cole, but considering his recent communications on Twitter, he looks certain to explore pastures new next season.

What do you think? Shocking news, or is it time to let the older players leave? Get involved in the comments below…