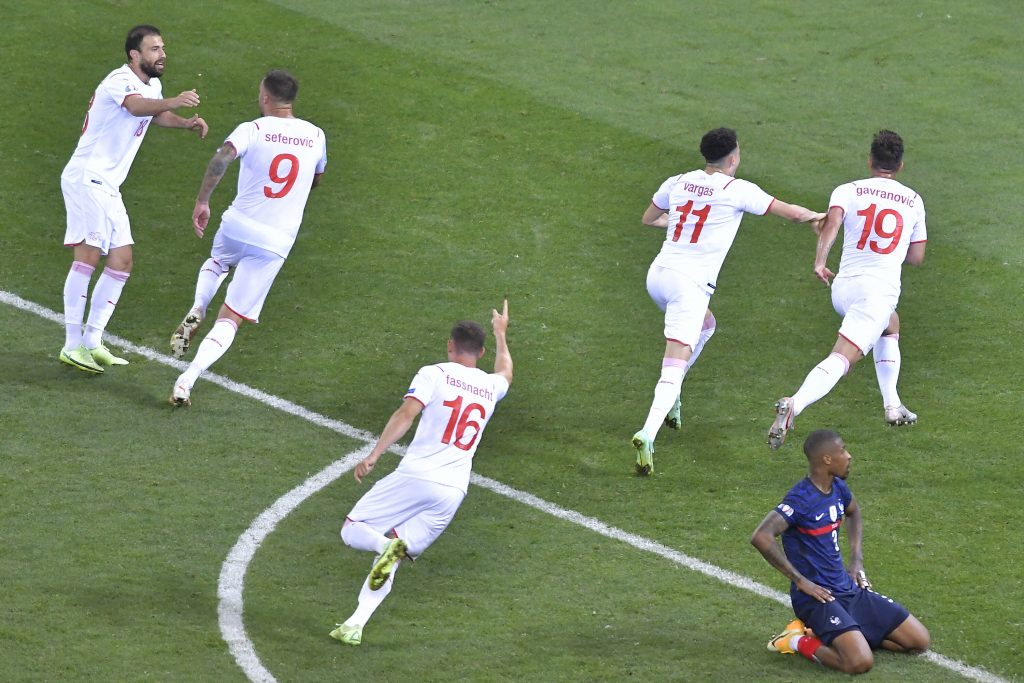 Switzerland pulled off a huge upset at Euro 2020 as they defeated France on penalties in a thrilling round of 16 fixture on Tuesday.

The World Cup champions squandered a glorious chance to take the lead in the second minute.

Antoine Griezmann’s corner found the head of Raphael Varane, but he skied his effort over the crossbar.

And he was made to pay for his miss not long afterwards when Switzerland took a shock lead.

Steven Zuber lifted a cross into the box, and Haris Seferovic beat Clement Lenglet to the ball and planted his header into the bottom corner.

Les Bleus struggled to find a way through the Swiss defence in the first half, coming closest with a long distance strike from Adrien Rabiot that whistled just past the post.

But they could not get a goal, and the half time whistle went with the score at 1-0.

Vladimir Petkovic’s men were gifted the opportunity to go two ahead early in the second half when Zuber burst past Benjamin Pavard and was brought down. After a VAR check, the referee pointed to the spot.

Ricardo Rodriguez stepped up, but his penalty was kept out by the right hand of Hugo Lloris.

This proved to be a defining moment in the game, as France quickly turned the game around.

They got an equaliser just five minutes later. Kylian Mbappe’s pass was behind Karim Benzema, but the Real Madrid forward brilliantly took the ball into his path and poked past Yann Sommer to equalise.

And just two minutes later, he had his second. Griezmann and Mbappe combined, with the former chipping across goal for Benzema to nod in from close range.

With 15 minutes remaining, France appeared to put the game beyond Switzerland. Paul Pogba picked up the ball from 30 yards out and rifled a screamer into the top corner to make it 3-1.

But this was not the end of the drama. Kevin Mbabu whipped in a beauty of a cross for Seferovic, who headed in from close range to get his brace.

France looked to hold out for the win but were pegged back in the 90th minute. Granit Xhaka fed substitute Mario Gavranovic with a pass, and he skipped past Presnel Kimpembe and fired into the bottom of the corner from the edge of the box.

And yet, this STILL wasn’t the last incident of the opening 90 minutes. Moussa Sissoko crossed for Kingsley Coman, who half-volleyed a cracking effort onto the crossbar.

Regulation time ended with the scores level, taking the game to extra time.

France had the first half of the extended period when the ball dropped to Benjamin Pavard at the back post, but Sommer was at his best to make turn the ball over the crossbar.

They had another couple in the second half but were still unable to grab a fourth goal. Mbappe sliced horribly wide after being played through by Pogba, and Olivier Giroud mishit when teed up by Marcus Thuram.

But they were unable to regain the lead, taking the game to a penalty shootout – the first of the tournament.

Switzerland were first to take, with Gavranovic stepping up to find the net for the second time of the night. Pogba followed him and also finished into the top left corner.

Next up was Fabian Schar, who coolly sent Lloris the wrong way. As for France, Giroud stepped up and emphatically converted into the bottom right.

Manuel Akanji was the third Swiss taker, and he rolled his into the bottom left. Thuram came next, finding the bottom left – although Sommer wasn’t far from getting a hand on it.

It was Ruben Vargas’ turn next, and he just about managed to score, with Lloris getting a hand to it. Presnel Kimpembe was the fourth in line for France, and he powerfully buried his effort into the top right.

It was down to sudden death, with Admir Mehmedi taking the walk before sending Lloris the wrong way. Mbappe took his penalty, knowing that a miss would knock his side out of the tournament.

The youngster saw his penalty kept out by Sommer, bringing an end to an enthralling game.

Switzerland pulled off the shock of the tournament so far, and they will face Spain in the quarter-final.

Hugo Lloris (7/10) – Made a vital penalty save to keep his side in it at 1-0. May be disappointed not to have saved Vargas’ penalty in the shootout.

Benjamin Pavard (5/10) – Didn’t add a whole lot going forward. Struggled at times at the back.

Raphael Varane (5/10) – Given a hard time by Seferovic and Embolo. Should have scored early on.

Clement Lenglet (5/10) – Beaten in the air by Seferovic for the goal. Substituted at half time.

Presnel Kimpembe (5/10) – Stuck his penalty away very well, but got beaten far too easily by Gavranovic for the equaliser.

Adrien Rabiot (6/10) – Playing in an unfamiliar left-back role, he deputised admirably and provided some attacking threat.

N’Golo Kante (6/10) – Made a few tackles and interceptions, but wasn’t at the standard we know he can be.

Paul Pogba (8/10) – Produced several moments of quality, including an incredible goal which should have won France the game.

Antoine Griezmann (8/10) – Looked lively even when France were struggling. Some excellent work in the build up to Benzema’s second goal.

Kylian Mbappe (5/10) – Heavily involved in both of Benzema’s goal, but also squandered some good chances. Missed the decisive penalty in the shootout.

Karim Benzema (8/10) – Helped turn the game around with a quickfire brace. Brilliant touch and finish for his first goal.

Yann Sommer (8/10) – Can’t be blamed for any of the goals. Made a few good saves and did very well to keep Mbappe’s penalty out.

Silvan Widmer (6/10) – Kept the French frontline quiet in the first half, but failed to cope in the second.

Nico Elvedi (7/10) – Did well up against Mbappe. Not so comfortable against Benzema and Griezmann.

Ricardo Rodriguez (5/10) – Missed a penalty at a crucial time. Struggled afterwards before being substituted.

Steven Zuber (8/10) – Took himself to the top of the assist charts with his fourth of the tournament. Did brilliantly to win the penalty as well.

Granit Xhaka (8/10) – A very good performance up against a strong midfield. Got a crucial assist in the 90th minute.

Xherdan Shaqiri (6/10) – Had some nice touches and put in one good free kick that should have been converted. Drifted in and out of the game.

Breel Embolo (7/10) – Provided plenty of problems for France with his pace and directness on the ball.

Haris Seferovic (9/10) *MOTM* – Scored two goals and was a constant menace for Kimpembe and Varane.