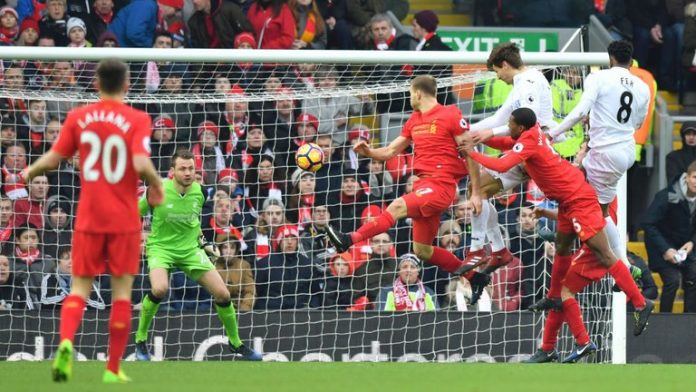 Jamie Carragher says his former club have no chance of winning the title until manager Jurgen Klopp resolves their defensive issues.

Klopp’s claim that he was a “really good defensive coach” was dismissed as nonsense by Carragher, with the Reds having already conceded 11 goals in six Premier League games this term.

Liverpool have conceded 1.27 goals per game on average over the past five seasons. The worst goals per game record by a Premier League champion was 1.18 by Manchester United in 1999/2000 and on only two other occasions has a champion conceded, on average, more than one goal per game.

“If Liverpool continue to concede this amount of goals, they’ve got no chance of doing what Jurgen Klopp has been brought in to do and what the supporters want and what the club wants and end 27 years without a title,” Carragher told Sky Sports.

“1.27 goals per game is almost 50 goals per season. In 25 years of Premier League history there are only three teams who have conceded in the 40s.

“They were each Manchester United. They won the league these three years very early, though.

“You will not win a title or go close to winning a title if you have numbers like Liverpool. That’s the big problem with Liverpool winning that way.”

It’s impossible to argue with Carragher’s view. Every successful side is built on a solid defence and Liverpool don’t have one.

However, the main issue is that Klopp is in denial. Praising your own defensive coaching abilities when all the evidence says otherwise must be a major worry for Liverpool fans.

Going forward Liverpool can be a joy to watch, but so were Kevin Keegan’s Newcastle side and that didn’t end well.

Klopp needs to see what everyone else is seeing and fast, or Liverpool’s long wait for a title won’t end any time soon.