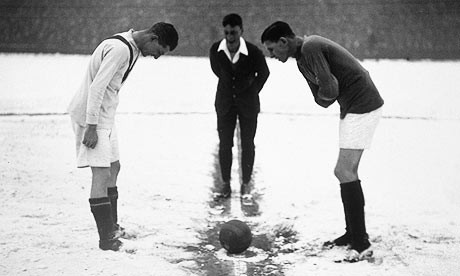 Heading into the festive period has a different feel or footballers all over Europe, with plenty getting a well-earned mid-season break while others are forced to partake in a gruelling list of quick -fire fixtures.

The sport in the United Kingdom famously has no break over the holidays, with the amount of games actually increasing over late December and early January rather than following in the footsteps of other nations.

The thinking behind the UK’s scheduling is to allow for less congestion through the other months of the regular season, it follows tradition and is an appeal to festive supporters who get the chance to watch or attend matches on their holidays.

However, a growing section of the football community has called for the British game to follow the example of their continental cousins and enforce a winter break.

English Premier League teams this season will play three games in the space of seven or eight days, including a fixture on Boxing Day, and compete in the FA Cup in early January.

In Europe, football players are afforded a reprieve and training camps in warmer climates aid conditioning before the second-half of the campaign begins.

Although there is an element of recovery and downtime, players also need to maintain the fitness levels they have worked hard to build-up over previous months.

The top clubs will embark on football circuit training to ensure that players do not lose their match fitness and can hit the ground running when the action restarts in the new year.

This is specifically important for teams participating in the Champions or Europa League, as a fixture against a continental rival that has had a minimal mid-season break can be waiting upon their resumption.

Of the major leagues, the Bundesliga has the longest break as competitive action finishes up on December 20 and does not resume until January 22.

Serie A  and La Liga action ceases on December 20 and returns on January 6 and December 30 respectively. Ligue 1 takes a hiatus from December 20 until January 8.

Other nations with harsher winter climates such as Scandinavian countries, Ukraine and Russia typically stop competing for a number of months, with this year no different.

Many of these sides and those from Germany embark in training camps and exhibition matches in far-flung places in an attempt to increase exposure and add fans; as such a winter break can also be a money-making initiative.

This year the winter break across the continent will be specifically pertinent, with Euro 2016 taking place soon after the culmination of domestic competitions.

It may well be that national teams like Germany that have had an extensive mid-season break are fresher than the nations that have opted to play through the Christmas period or had shorter amounts of time off.