These are but a few of the players whose contract is set to expire at the end of the season. And with the january transfer window practically at our doorstep, it is time to give these “old timers” a chance to prove they still are champion material. Time to make that zero-cost buy to win you that elusive trophy, cup, or championship title (or in the worst cases, save you from relegation).

In other words: it’s “Bosman Bonanza” time, with some real bargains to be made…

As customary after New Year’s celebrations, the January transfer market will soon re-open its doors on Wednesday 7th, with the usual frenzy of presidents, sports managers, agents haggling over player prices, and clubs jumping at the opportunity to either strengthen their rosters (Ibisevic) or to offload some undesirables (Adriano). But even better still during this period of the year (and any adept of the Football Manager series will nod in agreement with me), is that it’s time for “Free Transfer Bargains”. 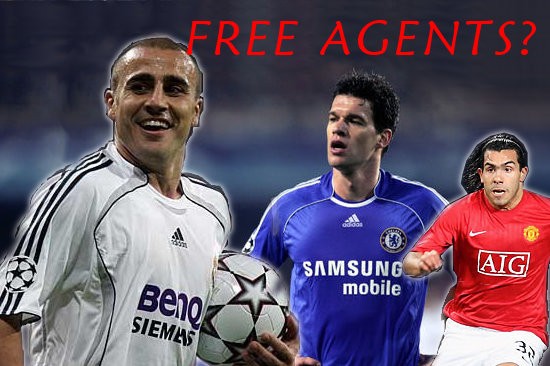 Yes my friends: with now six months left until the end of the season for most European leagues, players whose contract is set to expire in July can be snatched for zero cost. And while 80% of these players are generally over the age of 30, there’s still plenty of juice left to be squeezed out, even in old lemons.

Gazzetta dello Sport (my bible) had the fantastic idea of rounding up all of these soon-to-be free agents, and making of list for each of the Top European leagues. I’ve republished the Serie A bit here on Soccerlens (with accompanying text full translated by yours truly), with the other leagues (Premiership, La Liga, Bundesliga, and Ligue 1) available on mCalcio.

The rules in the free transfers game are simple mathematics: whatever the market value of the player may be, it’s multiplied by zero. And poof! The transfer cost disappears, leaving only the player’s wage to worry about.

It’s also a game of dates: Wednesday January 7th the transfer window will re-open, and will stay open until 19:00 CET of February 2nd. Players with expiring contracts however may be signed until March 31st!

Starting with the big clubs, there are several stars (nay, legends) with expiring contracts, mostly because of age limitations rather than due to wage negotiation problems. Top of the list is 36 year-old Pavel Nedved at Juve: the Ballon d’Or 2003 winner already renewed once last season, but may be persuaded to delay hanging up his boots for one more year. Far less likely is the case of Paolo Maldini: the AC Milan captain has repeatedly stated this will be his last season, and at 40 years of age (especially given Paolo’s amazing career) who can blame him. Also at Milan and on the verge of retirement, 36 year-old Giuseppe Favalli.

In other big clubs, Inter will probably be looking to keep Francesco Toldo and Julio Cruz, while Hernan Crespo and Olivier Dacourt are on their way out. Meanwhile Roma are debating what to do with Christian Panucci (he wants a renewal for another two years with the same wage as now), Fiorentina have renewed with Per Kroldrup and may be looking to do the same with Martin Jorgensen (perhaps even until 2011), while Inzaghino (Simone) will likely be leaving Lazio (Siena are on the move).

At mid-table, some clubs are adopting early renewal strategies (Genoa –Juric and Milanetto– and Sampdoria in particular), while others such as Bologna (Di Vaio, Antonioli, Bombardini) have postponed negotiations until the end of the season. For Marco Di Vaio however, the renewal is more than likely: you generally do not want to let the Serie A capocannoniere go out on a free transfer, especially when you don’t have too much cash lying around.

Torino are the ones who’ll be doing the most “liquidations” in June: only Eugenio Corini and Alberto Fontana (maybe) will be staying in Turin, while Ventola, Stellone, Franceschini, and Di Loreto are all on the way out. 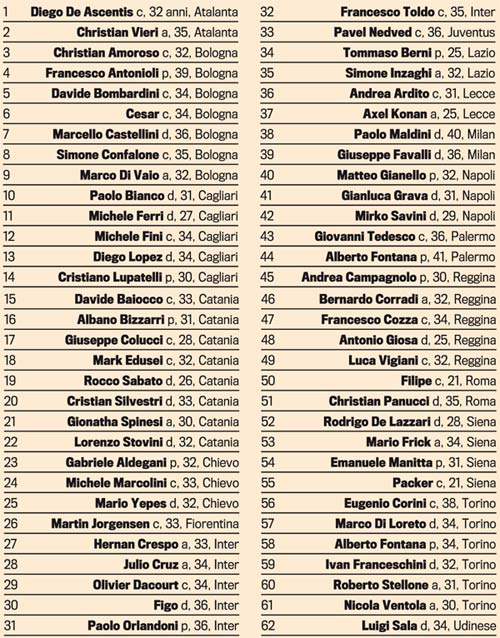 .
The other major European leagues are all available in the original article “Soccer Bargains: All EXPIRING CONTRACT Players for 2009” on mCalcio.

Marco Pantanella is the Author & Editor of the mCalcio blog