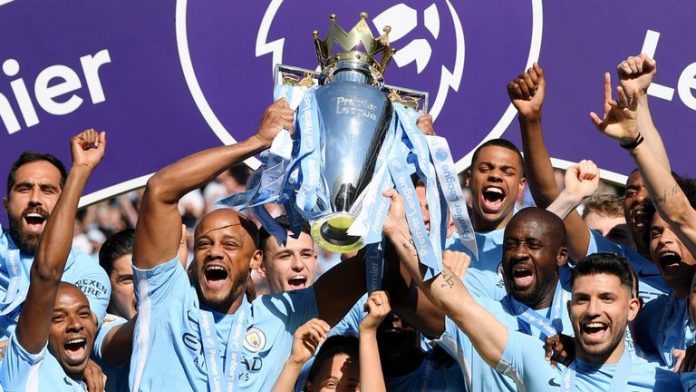 The 2017/18 Premier League season is finally done and dusted and it’s certainly been an interesting year at both ends of the table.

Manchester City deservedly claimed the title after producing some scintillating football for much of the campaign, while Stoke City, West Bromwich Albion and Swansea City wave goodbye to the top flight because they didn’t.

It was a frantic end to Manchester City’s record-breaking season as they snatched a 1-0 victory against Southampton on the final day.

Gabriel Jesus netted a late winner to see the Blues reach 100 points in the Premier League this season.

The result gave City the biggest winning margin, best goal difference, most away wins and most away points in Premier League history. They also recorded the most wins in a season, as well as the highest points total in the top flight.

Pep Guardiola’s side have raised the bar this season, laying down a marker for the other big clubs to try and live up to.

Liverpool’s 4-0 victory over Brighton & Hove Albion ensured they sealed a top four spot, but too many drawn games during the season messed up their chances of finishing higher.

Jurgen Klopp’s side are unbeaten at Anfield this term, but home draws against the likes of Stoke City and West Bromwich Albion hindered their hopes of a higher finish.

Liverpool have certainly made improvements under Klopp, but they still ended the season 25 points behind City and, whichever way you try and spin it, that’s a huge gap.

Michael Carrick was given a guard of honour from both sets of players as he walked out for his final appearance for Manchester United against Watford – 12 years after joining the club from Tottenham Hotspur for £16 million.

The 36-year-old midfielder had a hand in United’s opening goal, floating a superb 50-yard ball to Juan Mata, who squared for Marcus Rashford to score.

His standing ovation from the entire stadium when he was taken off with five minutes to go was richly deserved and he’ll be difficult to replace at Old Trafford.

Kane falls short but has plenty to be pleased about

Harry Kane started the day three goals behind Mohamed Salah as he sought to win the Golden Boot for the third season in a row.

His 7th minute goal against Leicester City gave him hope that he could catch the Liverpool star, but Salah responded in the 26th minute against Brighton to bag his 32nd league goal this term.

Kane grabbed another in the second half, but he was unable to add to his tally as Spurs ran out 5-4 winners.

However, a 30-goal haul is a fine achievement and Kane should be proud of his efforts.

Newcastle must not lose Benitez

Newcastle United’s 3-0 victory over Chelsea ensured they finished the season in the top half of the table – an excellent achievement when you consider the financial constraints manager Rafa Benitez has had to contend with.

The Magpies have been trying to persuade Benitez to sign a new contract with the club and retaining his services should be their number one priority this summer.

Owner Mike Ashley insisted after the game that “every penny” generated by Newcastle will be available to Benitez as the club looks to build on a successful season.

Whether that will be enough to keep the Spaniard at St James’ Park remains to be seen.