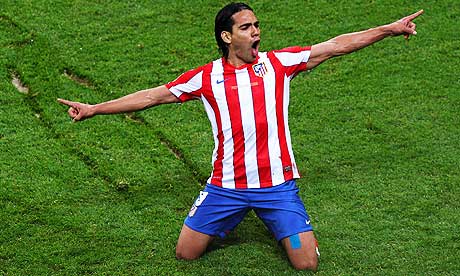 Recently, The Guardian ran a story about how Monaco’s Colombian striker Radamel Falcao could be on his way to Stamford Bridge as Jose Mourinho’s star striker capture this summer. They could well be right, and here are five reasons why.

Firstly, and most obviously Chelsea need a striker. If the Blues had a spearhead such as Falcao at the club, instead of the misfiring trio of Torres, Eto’o and Ba, it’s fairly safe to say that there position would be enhanced. But why Falcao, you ask? Well, Mourinho has already travelled to see him play impressively for his country, netting in an away win against Belgium, so he’s certainly on the Portuguese’s radar.

Secondly, France may not be the best place to prove yourself. Of course the tax-haven status of Monaco, is always going to please your bank manager, but players at the sharpest end of the pay pyramid these days although not wealthy beyond avarice, are certainly getting there. Additionally, football is not a well-supported support in Monaco, and crowds often crawl just over the 3,000 mark to watch the expensively-assembled squad perform. It can’t really be inspiring. And on top of this the fact that Monaco still seem a couple of notches below PSG and there seems little chance of bullying their way to any real glory unless the team from the capital get bored.

Thirdly, Falcao is now just turned 28 and if he wants to make his mark on world football, Monaco may not be a big enough stage. Chelsea however offer a big window within which to parade your skills worldwide. Exposure in the Far East and America are very much part of the Stamford Bridge club’s PR strategy and success playing with the Blues will make Falcao’s name renowned worldwide.

The fourth reason is money. Of course the west London club cannot offer the tax-free status available in Monaco, but they remain one of the few clubs in the world able to offer the sort of salary that Falcao could probably demand. Of the Premier League clubs, perhaps only Manchester City, who are already well-served in the striker department, or Manchester United, whose priorities may lie elsewhere could really compete.

Finally, the opportunity to play in front of a trio of exciting midfield players such as Hazard, Oscar and Willian would present an enticing prospect for any world class striker. Even the misfiring trio currently heading up the Blues’ squad have managed to net some goals with these guys prompting them. For a top-drawer exponent of the striking art, the chances presented would offer a feast of opportunities.

It seems inevitable that Chelsea will recruit a top notch striker during the summer and whilst there are other names being touted such as Diego Costs and Edinson Cavani, these are five reasons why Falcao could be Mourinho’s man