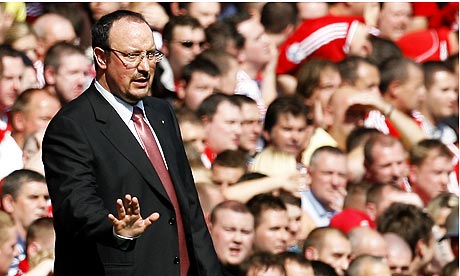 Rafa Benitez looks set to replace Carlo Ancelotti as the next Real Madrid manager. It is evident that the fans and the players are keen to stick with the La Decima winner, but it seems Benitez might be in charge next season if Perez has his way.

Carlo Ancelotti is a world class manager and an even better person, loved by all of his players and fans. Losing him is not ideal for any club/fan base, but here are a few reasons why Rafa Benitez might be not be bad appointment after all.

Rafa Benitez is a proven winner. The Napoli manager has won trophies in every country he has managed in. The former Real Madrid coach won the La Liga with Valencia as well and there is no reason why he cannot achieve that once again with Real Madrid.

Offloading the likes of Xabi Alonso, Casemiro and the injury to Khedira left Madrid with a defensive imbalance this season. With the array of attacking talents at Real Madrid, Rafa’s defensive coaching will help balance it out and make them stronger as an unit.

It is important to remember that Real Madrid won their last two league titles under defensive managers (Mourinho and Capello). Rafa Benitez could be key to Real Madrid’s league success next season.

Regardless of what you think about Rafa Benitez, the man is an elite coach when it comes to European games. His track record with Liverpool and Chelsea show that he has the tactical know-how to do well in the Champions League.

Rafa Benitez is a Real Madrid man. He played for Real Madrid and then joined as a coach. He knows the club inside out and is well aware of the expectations and demands at the Bernabeu.

Rafa has shown the ability to deliver under pressure and his experience of being a part of Real Madrid earlier will help.

Rafa Benitez enjoys a great relationship with Florentino Perez. Perez is loved as well as hated by sections of the Real Madrid fan base. Hated mainly because of his lack of patience and loved for his big name signings.

Regardless of his reputation amongst the fans/media, Perez calls the shots at the Bernabeu and Rafa’s good relationship could be a huge positive for the club.

Who knows Real Madrid might just flourish under the duo?