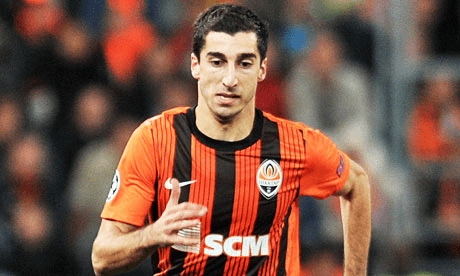 Liverpool have reportedly set their sights on 24-year-old Shakhtar Donetsk midfielder Henrikh Mkhitaryan, with reports suggesting that a £22 million bid is imminent.

Brendan Rodgers seems keen to add to his midfield reserves, giving him a core of top quality young players to perform alongside the likes of Steven Gerrard and Lucas heading into next season.

Mkhitaryan admitted earlier in the season that he wanted to leave the club and play for one of the biggest sides in Europe, shortly after Shakhtar had been knocked out of the Champions League.

“For every player, to play for the strongest clubs in the world is a dream, and the main goal. I will do everything possible to move this summer to a different team,” he told reporters following Shakhtar’s exit from Europe.

1) He was one of the highest scoring midfielders in Europe last season, bagging 25 goals and ten assists from all performances in the Ukrainian league.

2) Mkhitaryan has 36 caps for Armenia at international level with ten goals. He’s also represented his country at Under-17, Under-19 and Under-21 level.

4) His record of team honours is quite prolific for a player of such a young age. In total he’s won 14 trophies with senior clubs Pyunik Yerevan and Shakhtar Donetsk.

5) He is well connected in the world of professional football, as his mother works for the Armenian Football Federation and his sister works at UEFA.

The problem Liverpool now face is matching that fee because they don’t have tens of millions to spend in the summer transfer window.

An insider at Anfield told the British press earlier in the season that the owners were not concerned about spending big money but more concerned with creating a sustainable business model for the club.

“The owners are not ¬overly concerned with the financial position of the club, but there won’t be huge amounts of money made available for investment in the team,” said an Insider as per the Daily Mirror.

That led to rumours of a £20 million budget going around in press reports, which if true means Liverpool have no chance of getting Mkhitaryan if other clubs come in and create a bidding war.