As of next year, the two most prestigious individual accolades in world football will cease to exist as seperate entities, and merge to create a single globe-spanning award.

The deal was jointly announced by the publisher of France Football magazine Marie-Odile Amaury and FIFA president Sepp Blatter yesterday, with Blatter telling a post-meeting briefing;

“The winner is football because, as of January, we will have one single trophy for the best player in the world and this will be the Ballon d’Or.”

France Football’s award had always traditionally set the precedent by being presented first (usually in Paris in early December) with FIFA’s honour being announced a month later at a gala ceremony held, in recent years, at the Opera House in the governing body’s home city of Zurich.

However, the revamped FIFA Ballon d’Or award will be presented in Zurich at an annual ceremony that has been tentatively pencilled in for 10th January.

It is fairly easy to see why France Football and FIFA have decided to amalgamate the two awards as, for the past five years running, the same player has been bestowed with the same honour.

Ronaldinho, Fabio Cannavaro, Kaka, Cristiano Ronaldo and (current holder of both gongs) Lionel Messi have all systematically swept the board at each of the respective organisations’ voting booths – meaning that the introduction of a homogeneous award will seemingly have little impact on the outcome and save a small fortune on self-congratulatory champagne. 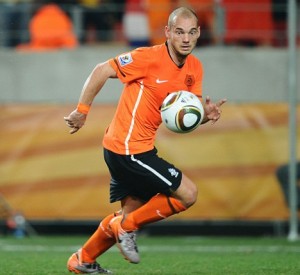 So, taking the news of FIFA’s new ‘super award’ into account – let’s have a premature look at some of this year’s prospective runners and riders.

The first name that springs to mind is, unsurprisingly, that of the Netherlands’ four(ish)-goal World Cup hero Wesley Sneijder.

His outstanding performances in South Africa are still freshly emblazed in the collective minds of the football-watching public at large, but those with slightly longer memories (approx. 67 days longer in fact) will remember that Sneijder is actually bidding to complete an unprecedented personal quadruple this season.

The Dutch playmaker has already acquired an impressive triple haul of winners medals on the domestic front this season (winning both the Italian league, cup and the Champions League with Jose Mourinho‘s invincible Inter Milan side) in a gruelling, but nevertheless fruitful campaign.

Even if you view Sneijder’s achievements on a slightly more microcosmic plain, you cannot argue that he functions as an instrumental point of fulcrum in almost every single game he plays – for club and country. 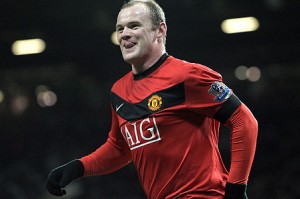 Wayne Rooney had a pretty abysmal World Cup, that is a rubber-stamped fact, but four underwhelming (to put it politely) performances do not a great season ruin – despite what the English media may have you believe.

With Manchester United’s metaphorical shoulders’ slumped at the loss of talisman Cristiano Ronaldo to Real Madrid, the striker almost single-handedly hauled his club up by it’s haunches last term, thus proving that he could carry the weight just as his former teammate had done so prodigiously the season previous.

Didier Drogba is another English-based star that failed to shine convincingly in South Africa, but 29 league goals, a second career Golden Boot award and a Premier League winner’s medal are all salient arguments for the powerful Ivorian forward’s inclusion on anybody’s list of potential nominees. 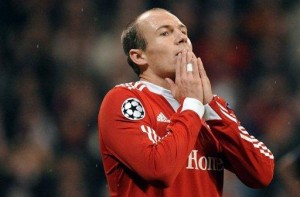 Arjen Robben‘s Champions League exploits are sure to have caught the eyes of the ever-diligent FIFA panel, as the Dutch winger’s spectacular goals continually helped to propel Bayern Munich through the competition – before eventually losing out to Sneijder’s Inter side in the final.

The 26-year-old (it’s hard to believe, I know) has already taken most of the domestic-level plaudits in his debut season in the Bundesliga, after being unanimously crowned the German Player of the Year for his major role in Die Roten‘s double-winning campaign.

What can you say about Xavi that hasn’t already been said a hundred times before? The Barcelona man is still criminally underrated by many (mainly as he doesn’t possess ‘extroverted’ qualities such as pace or trickery) but his master puppeteer midfield string-pulling is the foundation on which both Barca and Spain’s ticky-tacky football is based. A consummate, unwavering maestro. 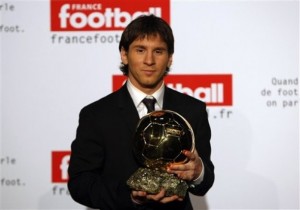 Lionel Messi is the present holder of both the soon-to-be obsolete awards mentioned previously, and is widely expected to be bestowed with the new incarnation of FIFA’s trophy.

The dimuntive winger is an unavoidable certainty to be on the list of candidates after another imperious 34-goal season at the cutting edge of Barcelona’s attacking triptych.

Honorable mentions must go to Frank Lampard (yet another 20+ goal season for Chelsea), ‘Cesc Fabregas (grew into his captain’s role at the heart of the current Arsenal side), Iker Casillas (one of the few constants in a strangely fluctuating year at Real Madrid), Carlos Tevez (a fantastic debut season for Manchester City) and Diego Milito (finally announced himself on the world stage at the age of 30/31).

Anyone I’ve missed? I’d love to hear your suggestions…