…or at least that’s what it feels like, considering Blatter’s latest move.

It was probably the panic that is quietly settling in as FIFA continues to keep a watchful eye on South Africa as it prepares to host World Cup 2010.

The next World Cup is still about two and a half years away, but the mutterings of soccer pundits have everyone wondering if South Africa will get their act together to make the necessary preparations for the massive tournament, and if not, what then. The crime, and not so much the infrastructure, seems to be the problem, and FIFA’s hands are rather tied in that respect.

FIFA surely must have anticipated this when they awarded South Africa 2010, but hindsight is 20/20, and these revelations, among others, might have been the triggers that FIFA needed to stop its World Cup continental rotation policy. The downside to this of course is that the ending of the rotation will likely close up the opportunity for smaller, non-European countries to stand much of a chance against the entirety of the European continent.

Outside of Europe, soccer focused Americans are smiling as their odds of being able to host another World Cup have been upped considerably, but the infrastructure would still require the majority of the games to be played in gridiron football stadiums, and the majority of the population probably still won’t give a damn in comparison to the rest of the world.

On the flip side, America’s motherland is celebrating because their desire to host (despite having done nothing for the game, thank you Jack Warner) has been amazingly boosted. FIFA seems to want England to bid and England assumes that it will be awarded to them. This also paves the way for specific regions of Europe to be highlighted: rumors are already circulating of a possible tri-host, like Be-ne-lux (Belgium-Netherlands-Luxembourg).

While the rotational policy was short lived (introduced in 2000) it did some good: Asia hosted their first World Cup in 2002, and in 2010 South Africa will be the first African host country. Sepp Blatter acknowledged these feats in a statement released by FIFA today. 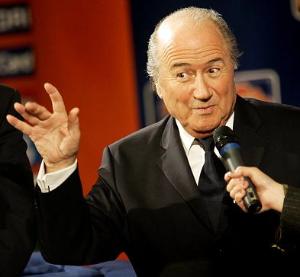 Since several associations from different confederations have already declared their interest in bidding, the FIFA executive came to the conclusion that as from 2018 the bidding procedure should once again be open to all continents, except those parts of the world that have hosted the two previous tournaments.”

So maybe it’s no harm, no foul, as the rotational policy seemed to be a concept begun with an expiration date in hand, to be retired after its primary aims were met. FIFA’s objectives are always exponential, and while its consideration towards exposing the game to smaller countries is needed, it must also ensure that host countries have the proper capabilities to host a safe and successful tournament.

On a more socially conscious side, while these tournaments are amazing sources of revenue for the host countries, FIFA may be uneasy about countries launching otherwise “prestige” projects without the ability to fully ensure the necessary safety for both the players and the fans that is needed to have a successful World Cup.

Especially with the corporate persuasion that the World Cup has adopted, FIFA probably wants to ensure that those sponsors are taken care of. The way South Africa’s preparations are going, those dollar signs must be flashing red. Five star hotels, top notch cuisine, and the other amenities that highly industrialized nations offer tend to be the choice for many corporations (and footballers’ wives), and the reality is that many smaller countries simply cannot accommodate those needs, at least not on the time table FIFA requires.

With the money that these sponsors pour into the game, FIFA may simply be responding in kind.