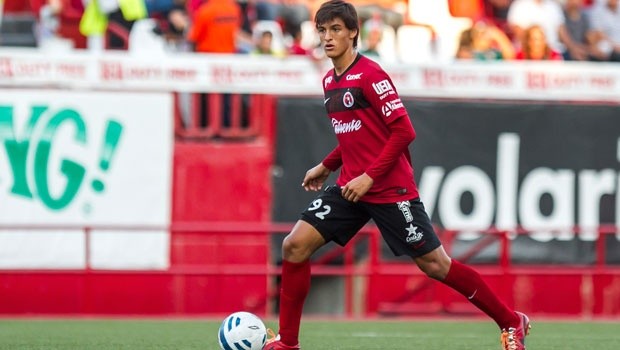 The son of Mexican international Frenando Arce has chosen to represent his birth nation, the United States.

The California native Fernando Arce Jr. has pledged to play for the Yanks after playing in three games for the U.S. Under-20 National team, and helping the Stars and Stripes win the 2014 NTC Invitational.

“From the start, I said that whoever called me first I would join that team forever,” Arce Jr. told American Soccer Now. “The U.S. called me first and showed a lot of interest in me so the U.S. will be my national team.”

To most Mexican fans, Mexican/American players who are heavily involved in Mexican soccer from a young age, and still end up choosing to represent the United States over El Tri is something they are still getting use to. With players like Joe Corona and Edgar Castillo who once suit up for Mexico and then switched to the U.S. afterwards. Or you got players like José Francisco Torres and Michael Orozco who played almost their entire careers in Mexico but decided to play for the Yanks. Even though many Mexican fans wanted them to play for El Tri, but instead they choose their nation of birth over their parents heritage.

However, the Fernando Arce Jr. situation is a new level for the fans south of the border to deal with. The reason for that is simple, his father Fernando Arce has represented his nation 47 times and has scored seven goal in the process. Not to mention he has played in multiple rivalry games against the U.S.; which in CONCACAF is the biggest, most heated, and most historic rivalry in the region.

With the 17-year-old Club Tijuana midfielder having such deep and rich roots of Mexican national team history running through his veins, one would of thought that it would of been an automatic decision to choose El Tri over the USMNT. However, when Arce Jr. made the decision to represent his nation of birth over the country he has lived in for almost his entire life due to his father 14 year professional career played entirely in Mexico. It would have not been surprising that Arce senior would not react that well to his sons decision, but instead he supported his sons choice to play for the Stars and Stripes over El Tri.

“First of all, he congratulated me that the U.S. national team had called me because being called by a national team is a great honor,” the 17-year-old Mexican/American midfielder told American Soccer Now, about his father’s reaction to the U.S. call-up. “So he told me that he was very happy. He also told me it was my decision for whom to play. As I had mentioned, I always said I would join whomever called me first whether the U.S. or Mexico. In this case it was the U.S., so he told me to write my own story and pick my own path and that hopefully it would be even better than his.”

Now that his first caps for the United States are in the books, the 17-year-old midfielder is now turning his attention to making the squad that will compete in the 2015 CONCACAF U-20 Championship that will be hosted in Jamaica during January 9-24; and the ultimate goal of helping the Yanks qualify for the 2015 U-20 World Cup in New Zealand next summer.

“My ultimate goal is to play with team U.S. in the U-20 World Cup,” Arce, Jr. told American Soccer Now. “I am glad to be a part of this call up with the team and will work hard at 100 percent to get to the World Cup and play well there.”