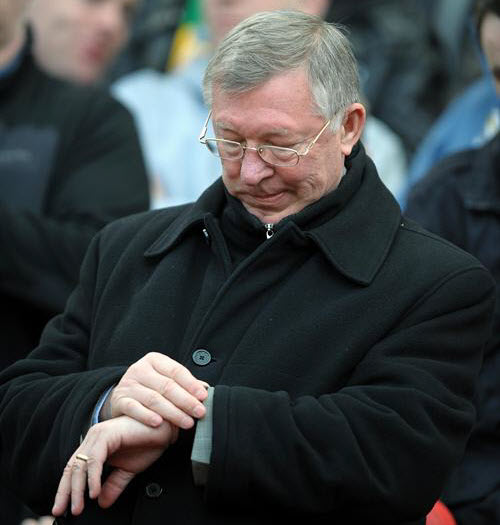 England were outclassed by France at Wembley on Wednesday, which has elicited the usual rants about England players lacking either a) the “technique” to play against foreign teams or b) the “passion” to wear the England shirt. Both of which are poorly defined complaints that accomplish nothing. Fergie Time’s one actual, tangible, teeth-grindingly annoying problem with the England game this week was the amount of whining from Premier League clubs before and after the game.

Newcastle seemed to think Andy Carroll’s groin strain was so life-threateningly bad that they asked the FA to reconsider Carroll’s England debut for fear it would leave him unable to face Bolton this weekend. And Liverpool’s conditioning coach Darren Burgess blew a fuse after Steven Gerrard picked up an injury, screaming on Twitter that England and the FA were “Completely amateurish and now we pay for their incompetence. Absolutely disgraceful.”

If Newcastle and Liverpool had their way, then England’s most promising #9 would be yet to make his international debut and England’s vice-captain would be kept in bubble wrap during international weeks. You can’t build a successful international team that way. You can’t put club football first for 22 months and then expect England to perform like champs in international tournaments. So maybe Premier League clubs – and fans – could do the national team a favour and at least pretend to care about international football, even – and maybe especially – when it’s not World Cup time.

THE NEWS WE COULD LOSE:

Despite what you may have read above, England’s worst enemy might not be over-protective Premier League clubs. It’s lazy journalists.

Seems you can only be England manager so long before the press decide you’re some sort of simpleton, and give you a rhyming nickname (see: Steve McClaren, Wally with a Brolly). It was Fabio Capello’s turn this week, as someone at The Sun decided to brand the England manager “the prat in a hat”. Presumably they saw that Capello was wearing a hat, dug out the old “England Manager Rhyming Insult Dictionary” and yelled “Eureka!” when they found the word “prat”.

THE KIDS IN AMERICA:

One team getting a lot less hassle from their media, and having a lot more success with their young players this week was the USA. Several youngsters made international debuts for the US away to South Africa, and 17-year-old New York Red Bulls striker Juan Agedulo became the youngest goalscorer in modern USA history when he hit an 85th minute winner.

Week 14 of the the Soccerlens Fantasy Football Game is coming. To be in with a chance of winning the weekly prize money, just pick your XI and enter.

Worst teammate of the week: Has to be Nani, who ruined what would have been a beautiful Cristiano Ronaldo goal for Portugal vs. Spain. Ronaldo destroyed Spain’s defence with a cutback and a roll, then chipped the ball over Iker Casillas in goal. The ball was clearly going in, but Nani decided to get his head to it anyway. In an offside position. Presumably Ronaldo only resisted the urge to slap Nani’s face off of his face because Portugal still beat Spain 4-0.

Best goalkeeper in Belgium: Used to be Michel Preud’homme. But now it’s mud:

Worst miss ever: I don’t throw those words around lightly. But 18 year-old Qatar striker Fahad Khalfan was in the six yard box with the ball at his feet, with no defenders and no goalkeeper between himself and the goal. And somehow he hit the post. In extra time of an Asian Cup quarterfinal. Which Qatar went on to lose 1-0.

It’s the North London derby this Saturday: Arsenal vs Spurs at The Emirates, featuring the talents of Gareth Bale, Rafa van der Vaart, Cesc Fabregas, Samir Nasri and more. It’s also William Gallas – very much the backwards Sol Campbell – returning to Arsenal with his new team. I’m sure Arsenal fans will give him a warm welcome.

The 3 Up Front crew discuss Chelsea’s meltdown at Sunderland, Asenal’s title credentials, and the big question from the top of this newsletter: Club or country? Listen to episode 14 and then subscribe via iTunes for more.