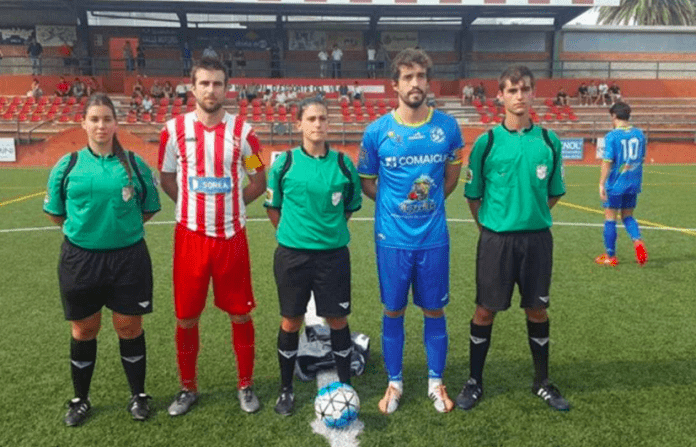 A female referee suspended a lower-division match in Spain to remove an abusive fan from the ground, according to AS.

Marta Galego, who was refereeing the game between UE Valls and Cambrils Unió, brought play to a halt after hearing a spectator in the stands ask her to “go wash the dishes”. She ordered the offending person to be removed so that the game could begin again.

Under the Catalan Football Federation’s initiative to have “zero insults in the stands,” Galego stopped the match and had the fan, identified as a UE Valls supporter, ejected from the grounds. Once the sexist spectator was removed, the remaining fans in attendance showed their support for the decision and gave Galego and her fellow officiating crew a standing ovation.

The fan in concern, a club member of UE Valls, took three minutes to leave the ground, after which the game resumed. Galego’s decision to do the same was appreciated, and she and her team received a standing ovation after the match continued.

This rule has been used for the first time this season. It has been put in place by the Catalan Football Federation as part as their ‘Zero Insults from the Stands’ initiative. The rule allows stopping a game in case of verbal violence from the stands – if the match is stopped three times, it will be called off”.

Perhaps enforcing the rule accurately would ensure people see the difference between offensive comments and “friendly banter”. Sexism in sport isn’t something to say nonchalantly, and to be made clear with the help of strict rules.