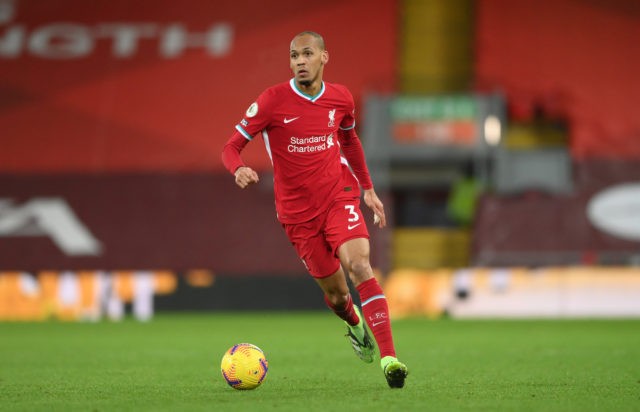 Liverpool midfielder Fabinho took to social networking site Twitter to express his reaction after the game against West Bromwich Albion on Sunday.

The Reds remained unbeaten at home and stretched their run to 67 games. However, Jurgen Klopp said that it felt like a defeat after the Champions were held to a 1-1 draw at Anfield.

Fabinho – who is now operating as a centre-back for the club following the injuries to Virgil van Dijk and Joe Gomez – was impressive yet again against the Baggies.

The Brazilian is a top-class central defensive midfielder, and he has been simply immense for the club since joining.

This season, Fabinho has been asked to play as a centre-back with both Van Dijk and Gomez missing for a large part of the season through injuries.

Fabinho made his 100th appearance for the club last night. Although he was disappointed with the result, he admitted it was an ‘honor’ to achieve that milestone.

Many Liverpool fans have quickly responded to his tweet to let him know that he is a special player for the club. Here are some of the selected tweets:

We should have won these type of matches. You were superb like always. Rhys was too slow. Curtis should have kicked the ball forward. Congrats to reach 100 matches. YNWA

You are wrong fab! It’s an honor to watch you play for our club. You have been one hell of a servant. We are grateful. YNWA!!

You've been great for us Fab.Hoping for many more games to come.Just go and win the next one

One of the best we have had in that position. We'll done and keep going.

Wonderful landmark for a wonderful player 👏

It’s an honour to have you playing for us, Flaco ❤️

Fabinho has been simply outstanding at the back, and it goes to show what a quality player he is. However, this shift is temporary, and he will be shifted back to midfield once Gomez and Van Dijk return.

Having said that, he is expected to play in defence for a while, with Joel Matip now picking up yet another injury last night.

It remains to be seen whether Liverpool delve into the January market to sign a defender, with Sky Sports pundit Jamie Carragher suggesting that it could cost the Reds the title if they ignore the crisis.