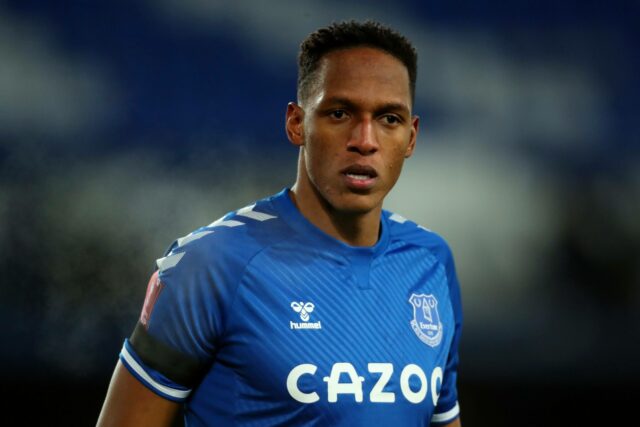 Everton are willing to sell defender Yerry Mina to fund a move for Napoli centre-back Kalidou Koulibaly, according to Football Insider.

The Toffees were linked with a move for Koulibaly last week, which came as a surprise to many Everton fans.

With Yerry Mina, Michael Keane, Ben Godfrey and Mason Holgate in the squad, it made little sense for Everton to target a central defender.

The Toffees will also have promising youngster Jarrad Branthwaite returning from his loan spell with Blackburn Rovers this summer.

However, Football Insider now report that Yerry Mina could be sacrificed to sign Koulibaly due to his erratic nature.

They claim that Carlo Ancelotti ‘admires Mina physically’ but privately believes he is ‘too erratic and error-prone for a top-tier side’.

As a result, Everton could sell the Colombian to fund a move for Koulibaly ‘or a defender of his calibre’.

It is also suggested that the Toffees are not concerned by the fact Koulibaly will turn 30 in June and are still pressing ahead with a deal.

Finally, Football Insider claim that Everton would not expect to sell Mina for more than £20 million in the upcoming transfer window.

This news will come as a shock for several Everton fans, with Mina featuring 24 times across all competitions and performing reasonably well throughout the campaign.

The Toffees will also need to prioritise funds in the right places this summer, with right-back and right-wing in desperate need of new signings.

However, with Everton targeting Champions League football under Carlo Ancelotti, Koulibaly would represent a marquee signing for the Toffees.

The defender is also well aquatinted with Ancelotti, having worked with him during his time at Napoli.

Should Everton splash the cash on Koulibaly and strengthen in other areas of the team during the off-season, they could be genuine contenders for the top four in the next campaign.