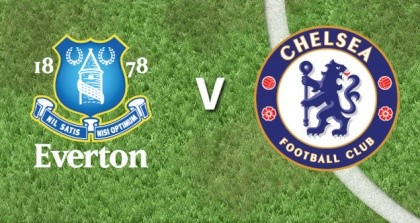 Chelsea will travel to Goodison Park to take on Everton on Saturday afternoon looking to enhance their unbeaten run to the season.

The Blues are second in the Premier League table with seven points, two points behind Liverpool, after having earned two successive victories in their opening two matches against Hull City and Aston Villa and drew their last league game against Manchester United at Old Trafford.

Jose Mourinho has an impressive record against Everton at Goodison Park. The Portuguese manager has yet to taste a defeat there having won four and draw two of his games his first spell in charge at Stamford Bridge. A victory against Roberto Martinez’ side will take the Blues to the top of the league, until Monday at least, when Liverpool take on Swansea at the Liberty Stadium.

Everton on the other hand have only managed three draws from their opening three fixtures and the new manager Martinez will be looking to get the first victory for his new club in front of the home crowd.

Good news for the Blues fans, attacking midfielder Eden Hazard is available for selection, despite the Belgian being forced to miss out on Belgium’s World Cup qualifier against Scotland with an Achilles tendon problem.

Everton signed Gareth Barry and James McCarthy on the transfer deadline day and both could make their debut on Saturday. McCarthy picked up a knock in the midweek, while away for international duty but will be fit enough to start the match.

Midfielder Darron Gibson and defender Antolin Alcaraz both remain on the sidelines, while Chelsea striker, Romelu Lukaku, who joined on a season long loan isn’t available to play against his parent club.