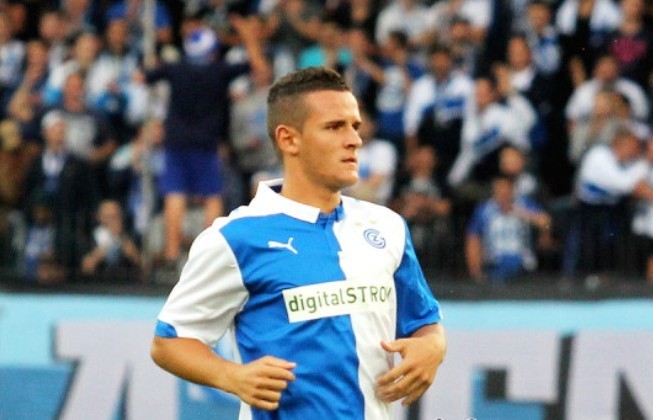 Fresh from being humbled by a brace from Switzerland international Xherdan Shaqiri on Monday at home, Everton are set to sign a Swiss of their own as it is understood the Toffees are lining up a move for Shani Tarashaj from Swiss club Grasshopper.

The 20-year-old Tarashaj is one of the most highly-rated young talents in Swiss football and Everton have offered the Swiss Under-21 international a four-and-a-half year deal to bring him to Goodison Park. The player’s advisers have been in Liverpool for the past few days to discuss terms and talks are at an advanced stage.

According to reports, Grasshopper will likely have Tarashaj back in Zurich on loan should they agree a fee with Everton. The move is part of Everton’s need to shore up their attacking ranks following Steven Naismith’s impending departure from the club in January. Naismith has struggled for regular playing time and is set to move to Norwich City.

Tarashaj can play as a secondary striker or an attacking midfielder and has scored eight goals in 18 games for Grasshopper this season. He has helped his club to second in the Swiss Super League, 10 points behind leaders Basel. Everton manager Roberto Martinez is a fan of the youngster, and regards him as a creative player who can flourish at the Goodison.

The Toffees will have to cough up a sizeable amount of cash to seal the deal for Tarashaj as the player recently signed a new contract at Grasshopper in September which tied him to the club until 2019.