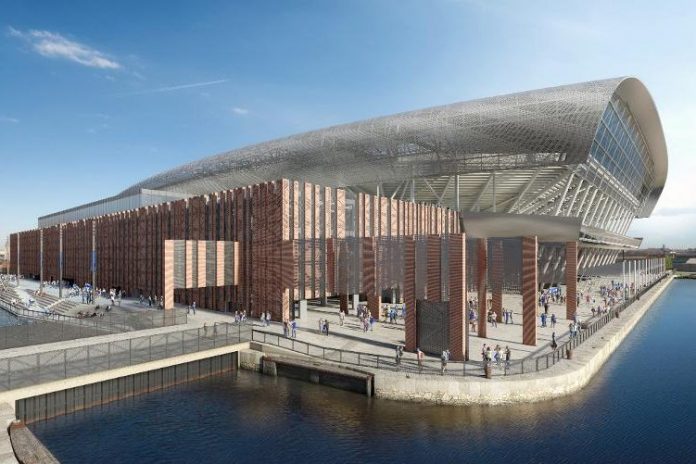 Everton have confirmed on their official website that the Toffees have appointed Laing O’Rourke as ‘preferred contractor’ to build the new 52,000-capacity stadium at Bramley-Moore Dock on Liverpool’s waterfront.

Last year in December, Everton revealed their final stadium designs ahead of the submission of a detailed planning application, which is expected to be determined by Liverpool City Council in the summer of 2020.

The Toffees have confirmed that construction work on the new stadium is expected to start later this year, subject to planning consent.

A pre-construction services agreement (PCSA) for a design and build contract is due to be signed after a competitive procurement process. It is expected to take around three years, although the final timeline will be shared during the PCSA period.

Laing O’Rourke will help with their digital engineering expertise and industry-leading knowledge of modern methods of construction.

The new stadium design takes its inspiration from the historic maritime and warehouse buildings nearby, and it is designed by MEIS architects. It combines historic and modern where the dynamic roof structure will be made from steel and glass, giving the stadium a modern finish.

Excerpts from the club official statement:

“It is estimated that The People’s Project – the combination of Everton’s planned new stadium at Bramley-Moore Dock and the delivery of a community-led legacy at Goodison Park – will deliver nearly £800m of societal value over a 10-year period.

“This will be supported by Everton, the Club’s official charity Everton in the Community and Laing O’Rourke working in partnership to make sure the people and businesses of Merseyside benefit via employment, apprenticeship, training and supply chain opportunities.”

Many Everton fans took to social networking site Twitter to express their reaction after the Toffees officially confirmed the news. Here are some of the selected tweets:

This is good news, great company has been chosen imo. Would like to see segments, concrete make up etc. delivered via the Liverpool dock estate by train so as to remove unnecessary lorry journeys and improve upon the stadiums sustainability figures.

On the banks of the Royal Blue Mersey 💙

Quite the list. Think they will do just fine designing their first stadium

Fantastic Appointment of a Contractor who has delivered numreous Major Projects in the City – Liverpool One, Alder Hey, Clatterbridge Liverpool to name a few. I'll be actively looking to get my Company #OptimalBuildingSolutions involved. #COYB

This is exciting (as a fan and as a construction profesional)

Any chance you are using the #UKBIMFramework to manage, deliver and operate the project?

Think they will mate… reckon that was part of the appeal. Built Liverpool One these too. Good move