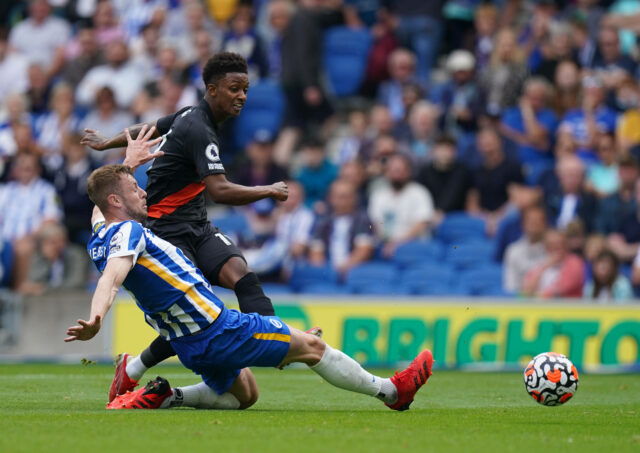 Everton registered their first away win of the 2021-22 campaign by beating Brighton & Hove Albion 2-0 in the Premier League on Saturday.

Summer signing Demarai Gray opened the scoring with a fine individual effort in the first half.

Dominic Calvert-Lewin scored his third goal of the campaign from the spot to double Everton’s lead.

Brazilian forward Richarlison wanted to take the penalty, but skipper Seamus Coleman insisted that it should be given Calvert-Lewin.

Coleman, who won the penalty after he was brought down by Joel Veltman, convinced Richarlison to hand over the ball to Calvert-Lewin, who scored from 12 yards out.

Allan and Abdoulaye Doucoure were superb in the middle of the park, as they controlled the game nicely.

However, Gray’s performance drew plenty of praise from Everton fans.

The Toffees signed Gray from Bayer Leverkusen for around £1.7 million on a three-year deal.

The 25-year-old’s contract includes the option for a fourth year, and many people are already saying that he is proving to be a bargain signing of the summer.

Gray, who scored against Leeds in the last game, showed flashes of brilliance throughout the game. Here are some of the selected tweets from Everton fans on Twitter:

Demarai Gray was absolutely excellent again today, Doucouré and Allan controlled the midfield and the entire back line remained strong all afternoon! Great win that! COME ON EVERTON! 💪🏻💙 #EFC #COYB

Great away win! I thought Allan was outstanding today. Gray showed flashes of brilliance & Doucoure is clearly up for it in an attacking sense, haven’t seen him make so many runs up to the attacking third! Up the toffees! Another good weekend! 💙 #EFC

Allan and Doucoure were brilliant today. Gray is a joy to watch, too. Keane with his best performance of the season by a mile. Only negative was DCL going off hurt. Hope it's nothing too serious. #EFC #COYB

Huge win for us going into the international break and a performance to go with it. Gray impressive again. #EFC 👏🏻

What a performance 💙 #EFC