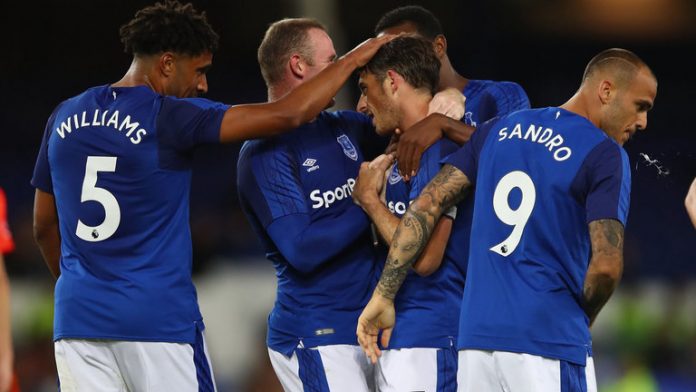 Everton’s 2-0 victory over Hajduk Split in the first leg of their Europa League play-off round tie equalled a 39-year-old club record.

Two victories over Ruzomberok in the previous round, an opening day win in the Premier League against Stoke City and Thursday’s success over Hajduk was the first time since 1978/79 that Everton had won their first four games of the season.

Goals by Michael Keane and Idrissa Gueye put Everton in control of the tie and matched the feat set by Gordon Lee’s side at the end of the 1970s.

The Toffees started that campaign with victories over Chelsea, Derby County and Arsenal, before extending the run to four with a crushing 8-0 success against Wimbledon – legendary striker Bob Latchford scored five against the Dons.

Everton’s winning run came to an end when they were held 1-1 by Manchester United at Old Trafford.

However, they weren’t defeated until losing 1-0 at Dukla Prague at the start of November in the second round of the UEFA Cup – a result that saw them exit the competition on away goals.

Brian Clough’s Nottingham Forest inflicted Everton’s second defeat just a week later, courtesy of a 3-2 success that took them into the last eight of the League Cup.

Everton’s 19-game unbeaten run in the league was eventually ended at Coventry City on December 23, with the home side claiming a 3-2 victory in icy conditions.

The second half of the season saw Everton crash out of the FA Cup against Sunderland at the third round stage, while they won just six more games in the league to eventually finish fourth.

The current Everton side face a difficult test on Monday in their bid to set a new winning record as they travel to face Manchester City.