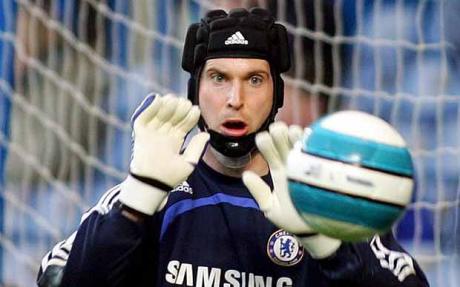 It is fallacy that a goalkeeper’s worth is measured in statistics. They can be measured only through very few statistics – goals conceded, shots faced, clearances or saves made or finally, a combination of all of the above. Numbers can only tell us so much. What they do tell us though, is in some measurable areas, Iker Casillas and Petr Cech are fading slightly.

With NHL goalkeepers, quality is assessed according to two numbers: GAA (goals allowed average) and Save Percentage. Though often used to crucify allegedly-underperforming netminders, GAA reflects a team’s tempo and defence as much as it does the quality of a goalkeeper. The more a team attacks and takes chances, the more possessions result with the results being increased shots at both ends – inevitably leading to more goals. Save percentage indicates a goaltender’s ability to stop a puck travelling towards him at speed – often highly dependent again on clarity of vision and lead-up play.

The same applies in football. A goalkeeper can only be expected to make so many saves per game as the goalmouth is larger and they have more duties than just acting as backstop. Football custodians need to be able to sweep the ball, come off their goal-line just so and finally, like their frozen brethren command and organise their defence.

Numbers can’t be expected to justify a goalkeeper’s position – Ben Foster of Birmingham City was amongst their best players this season (and statistically very similar to predecessor Joe Hart) yet his numbers barely reflect that and the Blues went down ignominiously. But where we can evaluate Xavi by the number of passes and completions he makes – notwithstanding his leadership – so can we get some small statistical undersatnding of goalkeepers through GAA and Save Percentage.

Who, of Europe’s regular goalkeepers, had the best season by these statistical measures?

The Top Ten in Europe by Save Percentage (minimum fifteen starts):

And the top ten by GAA:

With two numbers assessed in this manner, overlap is desirable as they indicate a surety both of defence and a keeper possessing either remarkable foresight or incredible athleticism. That way, we can suggest that Abbiati, Weidenfeller and the redoubtable Victor Valdes each had, among others, outstanding seasons. Also we can ruminate that both Iker Casillas and Petr Cech either began to display the first signs of age or infirmity, or an alarming predisposition to be “hung out to dry” Jack-Warner style by their defence.

This assertion is backed up – though tenuously, it must be said – by the fact that both appeared in the best GAA table but were only barely above average in Save Percentage. That their GAA scores are so high yet their save percentages are low indicates that when opposing players managed to get through the Chelsea or Real Madrid defence, those clubs’ keepers were either out of position (by their fault or their defence’s) or beaten by a succession of remarkable shots. Either could have happened. The only other possible explanation is that they each made a few howlers – like this Enckelman beauty.

This is further reinforced by the fact that neither faced a particularly large amount of shots. According to ESPN’s raw data (used for their uniform statistic-keeping across Europe), Almeria’s Diego Alves made the most saves per game – an astounding 4.79 per game. The average across Europe was 3.31 per game; Casillas made the second fewest saves per game (behind Weidenfeller) at 2.31 while only 13 custodians made fewer saves than Cech’s 2.61. This may seem harsh given both allowed less than a goal per game, but both may face increased scrutiny next year – for their performance, though very good, did not match up either to their reputations nor the exceedingly high standards both have set for themselves.

Both contribute so much to their teams it would be unthinkable to bench them – especially were Ross Turnbull to be given a start in Cech’s stead. While their on-field performance may not have suffered much, each of these legendary goalkeepers’ metrics are falling slightly. Look for a bounce-back season next year from each.

You can see the full list of European Goalkeeping Statistics at Balanced Sports’ Goalkeeper Stats page.

For more analysis and commentary, shoot across to Balanced Sports.  You can also follow Matthew Wood on Twitter @balanced_sports