At this rate, the total penalty count would reach around 125 at the end of the season. It should comfortably surpass the current high of 106 achieved in 2009/10. However, the worrying part is that the penalty conversion rate has been pretty average. Spot-kick specialists are finding it hard to covert penalties on a consistent basis.

In the 1993/94 season, only two penalties out of 82 (97.56% success rate) were not scored. Southampton legend Matt Le Tissier was unstoppable from the spot in that season, successfully scoring six out of six.

In comparison, the penalty success rate this season is a lowly 75% after Match Day 11. It was 72.73% after Match day 10, but it has slightly improved after Christian Benteke, Charlie Austin, and Harry Kane all scored from the spot in the last game week.

In fact, the last round of club football action before the international break was a productive one in terms of converting penalties. Out of the 18 penalties awarded in Europe’s top five leagues – Premier League, La Liga, Serie A, Bundesliga, and Ligue 1 – all were successfully put away. 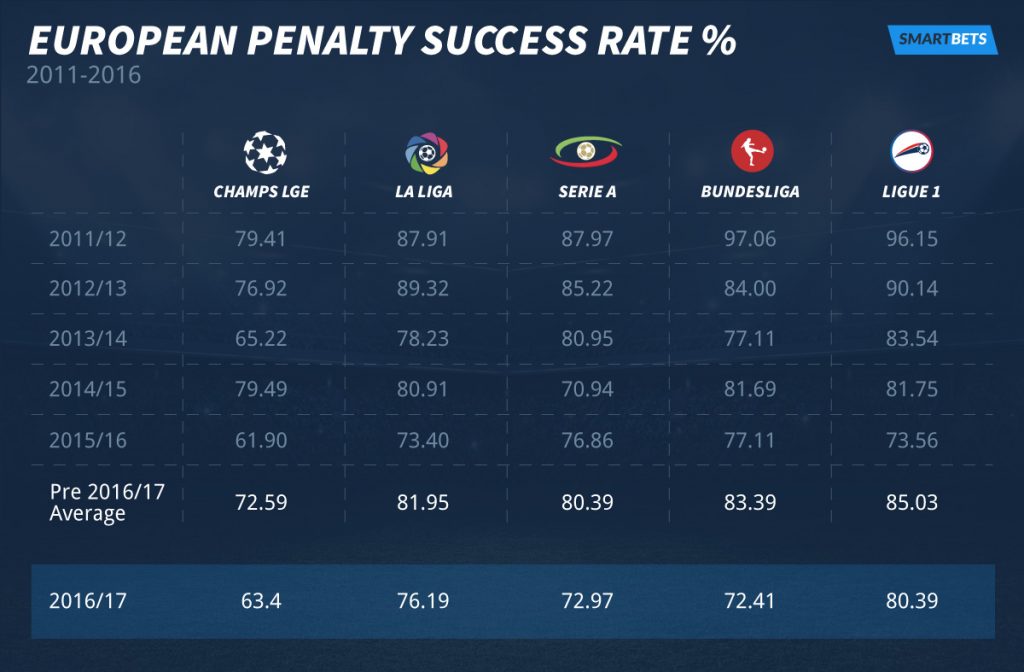 The overall drop in success rate is not restricted to the Premier League only. Bundesliga is down to 72% from an average of 83% and Serie A is also at 72% after falling from 81% over the past five seasons.

The figure is even lower in the Champions League. The Europe’s premier competition registers a poor penalty conversion rate of 63.63%, despite the fact that penalties awarded in the competition is up and in line with the increase in the Premier League, with 0.38 spot-kicks per match being given.

To put it simply, more penalties are being awarded this season, but a significantly lower percentage of those have been converted. With more data now being made available for goalkeepers and coaches, it has become easy to study the habits of penalty takers. As a result, the spot-kick takers are finding it harder to score consistently.