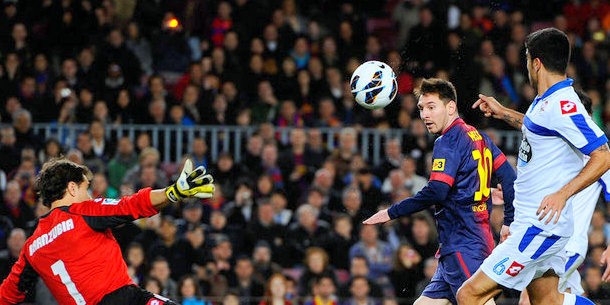 This has been a fascinating weekend of football in Europe where results dictated the fate of title races, individual bravura stole the show and pride prevailed in derby victory. Let us get straight back into major talking points.

Great fight back from Chelsea and Liverpool

For the first time at Chelsea, Rafael Benitez was spot on with his substitutions as the Blues came back from two goals down to level the match and take the FA Cup quarter final tie for a replay at Stamford Bridge.

United took the lead through Javier Hernandez (proving to be a nemesis for Chelsea) in the opening five minutes while Wayne Rooney added another six minutes later.

While Juan Mata and Oscar were sensational on Sunday, it was the substitute Eden Hazard who started the come back trail with a delicate curler past David de Gea and ten minutes later, Ramires levelled the tie after some brilliant interchange of passes.

Likewise, Liverpool still have a slim hope of making into the top four in the Premier League after earning a fantastic and memorable victory over fellow top four challengers Tottenham.

Despite taking the lead through Luis Suarez’s 22nd goal in the Premier League, Spurs came back strongly and went 2-1 up through Jan Vertonghen’s brace. However, the Reds kept on pushing hard and finally sealed victory through goals from Stewart Downing and match-winning penalty from Steven Gerrard.

Juventus took a significant step in retaining the Serie A title when substitute Emanuele Giaccherini scored in the stoppage time against Catania to send the Old Lady nine points clear at the top of the table.

While, elsewhere in Europe, the title races are more-or-less over, the interest was still there in Italy after Napoli managed to keep Juve’s lead to six points only.

However, the gap has widened, as Napoli choked under the pressure. Chievo earned a comfortable 2-0 victory, ending the Partenopei’s title hopes. More frustrating for the Naples is the form of striker Edinson Cavani, whose barren run of goals has continued to eight matches.

It’s all about personal accolades now in La Liga. The title race hardly exists and therefore the focus shifts on individual brilliance.

Lionel Messi, scored yet again as Barcelona earned a comfortable 2-0 victory over Deportivo La Coruna. It was his 47th goal of the season but most importantly the Argentina superstar created a new record by scoring in 17 consecutive league games.

His rival, Cristiano Ronaldo, has scored 39 goals this season after netting a brace against Celta Vigo. In all probability, he will cross the 40-goal mark yet again, which will be his 4th time in last six seasons. Incredible, isn’t it?

Schalke manages a double in the Revierderby

Schalke 04 gave their home fans in Gelsenkirchen some reasons to cheer about after earning a 2-1 victory over Jürgen Klopp’s Borussia Dortmund in Bundesliga’s fiercest local derby.

What makes the victory sweeter is that Schalke managed to do a league double over them for the first time since 2009/10.

Highly rated youngster Julian Draxler picked up a pass in the box from Atsuto Uchuida and hammered the ball past Weidenfeller leaving him no chance to save in the 12th minute of the match.

Talisman striker Klaas-Jan Huntelaar doubled the lead through a strong header in the 35th minute after the Dutchman was left unmarked in the box.

Dortmund came back sharply through Robert Lewandowski just before the hour mark. However, despite all their pressing, it was the home side that created the best of chances. They could have sealed the match comfortably had Teemu Pukki and Jefferson Farfan not been profligate in the goal mouth.

It obviously came from the one and only Zlatan Ibrahimovic who netted a brace to reach his 24th league goal of the season.

The league leaders, with that victory, are now leading the Ligue 1 table by four points and their nearest rivals Lyon drew 0-0 with Marseille on Sunday.