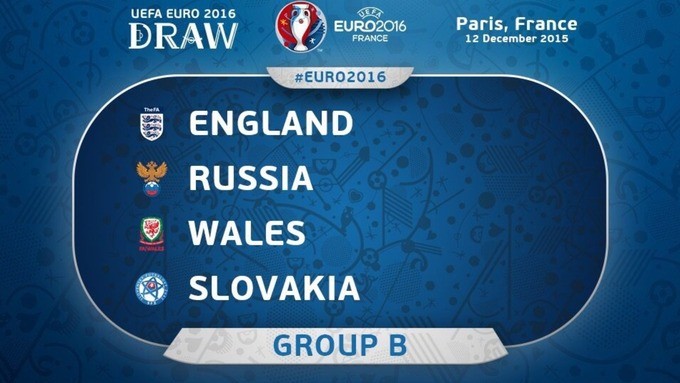 It’s time to take a look at what is going to be happening on Group B, where the mighty England will be facing Gareth Bale’s astonishing Wales and Slovakia will try to take Russia out.

Fact: England has never won their opening game at a European Championship in their history. England is always a mystery when it comes to big tournaments, but most of the time, the National team ends up disappointing the football community and their fans. It’s unexplainable, having one of the best leagues in the world and an arsenal (pun intended) of players that other countries can only dream of. At the European Championships, the English team has never done particularly well, never having placed higher than 3rd place. However, the fascinating statistic is that England often fails to get out of the group stage. If they can manage to open strong against Russia, I don’t see them having any sort of problem, but if history has taught us anything, the Russians might be able to claim one or even three points from the English.

Since the disbanding of the Soviet Union, Russia has had a difficult time building a competitive team. But after obtaining a magnificent 3rd place in 2008, the biggest country in the world has stated their presence. Russia qualified for the Euro 2016 in second place, managing to send Sweden to the playoffs and trailing Austria very close. They also scored profusely and defended well, making them a very strong side. Russia’s best option is an organised attack and a bit of luck during their first match. If they manage to get any points on June 11 against England, the opportunities to advance grow exponentially.

Slovakia has never taken part of this competition in the past. That makes them dangerous. Once again, remember Greece in 2004? The new-comers had a solid qualification process, coming second to Spain, but failing to show impressive qualities, conceding twice as much as Ukraine, who went on to play the play-offs and attacking moderately, Slovakia, earned their place and was drawn into a tough group to make the first appearance. On a positive side, Slovakia’s National team has only lost twice during the past years (against Spain and Belarus), and has managed to beat Switzerland and Germany. If there is a chance to become the dark horse, it is this one, for the boys managed by Ján Kozák.

The last team in this group is Wales, who behaved as an actual dark horse during the qualifiers and reached their second international tournament in history, including World Cups. It should not be a surprise that Wales seemed capable to take over Belgium’s reign during the qualifiers; their National team has loads of talent and experience who are used to playing fast and rough; exactly the type of football that is needed to get out of this group and make it to the next round. In the end, only results matter, but Wales only managed to score eleven times, every team in that group, except for Andorra scored at least sixteen times. Nevertheless, Wales only conceded 4 times, making them the best defending team in that group, even beating first place Belgium.

If there is a moment in which England needs to be lethal, it is now. Never has England has such amazing attack and in such a wonderful form. With the likes of Kane, Sturridge and the youngster Rashford, they are really not needing to rely solely on one player, but Jamie Vardy has proven he has that spark that can make the whole stadium burn like nobody else.

Top scorer of the Group during the qualifiers and a regular at Zenit, the forward is like a bloodhound when it comes to scoring. If the midfield can provide him with enough opportunities, the tall striker can make any team scared. Dzyuba came fourth on the overall goal scorers list during the qualifiers, only behind Robert Lewandowski, Thomas Müller and Manchester United‘s new jewel, Zlatan Ibrahimovic. I know, scary.

Experience is the best opportunity Slovakia has to get out of the group and the midfielder is definitely a leader among his peers. With a strong, rough style of play, Marek can create spaces, defend the ball and score the necessary goals to see Slovakia’s dream turn into England’s nightmare.

Do I really need to say it? The man is a powerhouse. Great accuracy, amazing speed, leadership and enough experience to help everybody around him. Wales has a great defence, but if they intend to get through, they are going to need Bale at his finest. Aaron Ramsey is definitely up there; but the torch is to be carried by Real Madrid’s man, Gareth Bale.

How could Group B develop?

England – Prediction – 1st Place: There is no doubt, England is taking the group. It should be fairly easy for the boys in white to destroy their opponents and finally win their first match at a European Championship. My prediction is that they will win two matches and tie one, either the first one or the last one, but they are definitely going all guns blazing against Wales, degrading them to the third place of the group.

Russia – Prediction – 2nd: Russia is a solid side with loads of experience, but most of all, they have a perfect balance of toughness and ability to play the ball. The Russians won’t beat the English, but they could save a point, beat Slovakia and draw or win against Wales; that would see them through.

Wales – Prediction – 3rd place: It’s not going to be on of those stories for Wales. They will be able to win against Slovakia on their first match, but after that, it’s all downhill. However, if they manage to hold their ground against England, they could shut a lot of mouths, including mine.

Slovakia – Prediction – 4th Place: This is not a surprise; Slovakia is part of a very difficult group and I just do not see them winning a game. In my eyes, the Slovakia national team could manage to get one point at best. But, remember South Africa 2010? They beat Italy and got through. The feat is not so difficult here and managing to win a game would put them in a good place to complete.

England vs Wales, on June 16 in Lens. You don‘t want to miss it. It has everything you need and it will be a battle more than a match. If Wales does a good job, England might be crossing the English Channel and heading back home sooner than expected.